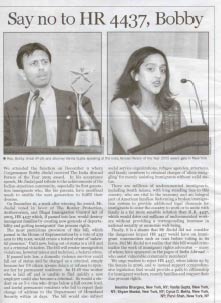 Following up on my post about Bobby Jindal being named Person of the Year by the India Abroad newspaper, a helpful anonymous source has emailed us a copy of the letter sent to the editor of India Abroad, expressing displeasure at their choice. What makes this story interesting is the list of signatories:

p>Here is an excerpt of the full letter:

p>We attended the function on December 9 where Congressman Bobby Jindal received The India Abroad Person of the Year 2005 award. In his acceptance speech, Mr. Jindal paid tribute to the achievements of the Indian-American community, especially its first generation immigrants who, like his parents, have sacrificed much to enable the next generation to fulfill their dreams.

p>On December 16, a week after winning the award, Mr. Jindal voted in favor of The Border Protection, Antiterrorism, and Illegal Immigration Control Act of 2005, H.R. 4437, which if passed into law, would destroy immigrant families by creating new grounds of deportability and gutting immigrants’ due process rights.

28 thoughts on “A letter to the editor”