There’s an old saying that on Christmas day, the only biz going are Chinese restaurants packed with Jewish patrons. When the other 80-90% of the country is distracted by holidays, superbowls, and the like, some interesting, if otherwise overlooked, ethnic combos rise above the fold.

I’m a news / TV junkie and usually keep the feed on in the background when I’m working from home. The last 30 min may have been a milestone for desi’s on TV news. 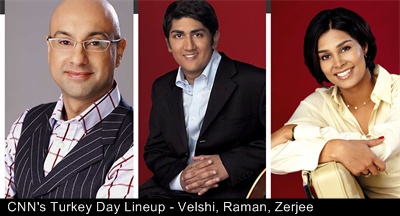 Today’s CNN Situation Room was anchored by the dapper Ali Velshi standing in for Wolf Blitzer who was undoubtedly enjoying time at home with his family. Relative to CNN’s usual fare, Sit Room is a more “raw” up to the minute format featuring a heavier mix of live reports on the big stories.

So, instead of the same Iraq update loop that gets run on Headline News, for ex., the update goes straight to the on-the-scene reporter – in this case, Raman Aneesh – posing with mic in hand in front of a row of Hummers. And, for an update from the international desk, he turned to Zain Verjee. 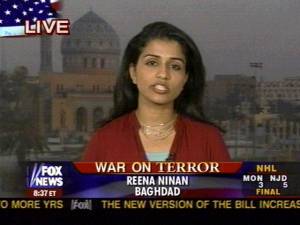 Now, at least when I did the quick check, MSNBC chose to deal with reporters on vacation by doing something different – they ran a documentary on the life and times of Michael Jackson

24 thoughts on “The Desi News Network”