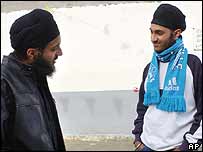 Like a lot of Americans, I’ve been keeping an astonished eye on the car-burning in Paris and France that is approaching the fortnight mark. Saurabh at Rhinocrisy has noted that a certain segment of the blogosphere, headed by Internment-Cheerleader-In-Chief Michelle Malkin, is having a field day.  What an opportunity to clumsily conflate France’s antipathy towards  certain war policies with imagined Gallic championship of any and every liberal cause as articulated in America. Just because the French have embraced the same notions of universal health care that some American liberals have, obviously they epitomize the multicultural state American liberals champion. Since Democrats like French bread and wine they must love French cultural policies.  /sarcasm.  But as those of us who actually pay attention to identity politics in France know, the French model is not quite the California-cuisine tossed diversity salad that American cultural purists love to hate on. Saurabh and the Francophilic Phoebe Maltz call a spade a spade:

I hate to be trite, but this picture is simply at odds with reality. France has been anything but multiculturalist, and in fact has been quite uniform in demanding that its Muslim minority conform, damnit, to the standards of French culture.(Link.)

Despite its shunning of hyphenated identity and insistence that all of its citizens are equally–and nothing but–French, France has a problem: whenever a minority group in country is involved in a conflict–one its members started, of which its members are victims, or a combination–the possibility of that group up and leaving is immediately brought up.(Link)

(It is, of course, as absurd to lump together all of France as to lump together all of India–the land that gives us LePen also gave us Zola.) Many observers  warn that it is a mistake to view these (so far relatively non-injurious) rioters as Islamic or Arab or Brown or Immigrant so much as poor  and unemployed. But I have to wonder if, by shunning the hyphen, France has forced the French children of immigrants to make an overly stressful choice. We affiliates of Sepia Industries might be considered connoisseurs of the hyphenated life-style. A hyphen is a useful prop, like a towel, that you can move about and rework as the situation demands. Sometimes you want it out, front and center, and sometimes it can stay in your purse. Immigration is hard, and tools can help. It was Hyphen Magazine’s blog which reminded me of the South Asian connection to the Parisian riots.

Hyphen Magazine styles itself Asian America Unabridged, and to steal a lovely phrase from Cicatrix, its pages are often soaked in Darjeeling and Orange Pekoe as well as Green tea. (Note echoes of Shah Rukh?) One of its bloggers, Neela, has shouted out to Sepia Mutiny before, and a few days ago she noted a recent Bay Area Sikh protest of the French policy of banning turbans in public schools.

Bay Area Sikhs said Thursday there is no evidence to suggest that French core values are threatened by anyone expressing their religious faith. Union City resident Sarabjit Cheema said she took the day off from her job at the California Department of Transportation, and brought her two youngest sons from Cesar Chavez Middle School to join the protest. If American schools were to adopt similar laws, Cheema said she’d pull her children out of school permanently and home-school them. “I took the day off work to support a cause that is very dear to me,” Cheema said. “All kids should enjoy the freedoms that my sons have.” (Link.)

After the rioting, some Indo-French are worried:

Shingara Singh Mann runs an internet cafe in Paris. He has been living in the suburbs with his family since 1978.Even though he holds a French passport, he says that he has had to struggle to get his due in the country.He is worried that the rioting will make his day to day life hard as people will get suspicious of all minority communities in general.(Link.)

Many commentators couldn’t help but compare this month’s Parisian riots with last month’s Birmingham riots. Cultural community defined around geographic ghetto just doesn’t seem to work so well.   The majority can’t wall off and forget a minority that’s integrated inside itself, and a minority can’t systematically attack a majority it’s surrounded by and lives with. To be clear, I’m not saying that America is peaches and cream–Neela’s other link was to a recent SF Chronicle profile of the California Sikh community, showing that sometimes the mixture is a bit too tart:

Didar Singh Bains, who came to the United States with $8 in his pocket in 1958 to join his father and grandfather who were working orchards, is now the biggest peach grower in the state and one of the richest people in Northern California. . . .Ram Singh and other members of the Fremont gurdwara tell a tale rich with irony about their experience giving blankets and food to victims of Hurricane Katrina staying in one of Baton Rouge’s largest shelters. “We asked if they knew who we are,” Ram Singh recalled with a sigh. “Almost everyone said, ‘You’re from the Middle East and are here for the oil.‘ (Link.)

Wow. Yet reading these articles–or hanging out at Sepia Mutiny–it’s obvious that for most of us, the notion of up and leaving is simply absurd, hyphenated or not. I’m as American as the next girl, and I’ll keep both my history and American future long and intact, thank you very much. Unabridged, like a young boy’s uncut hair. I’ve railed against the prevalence of the balancing act metaphor–everything in the immigrant’s life is not a dichotomy. The hyphen doesn’t need to be a fence to stand on precariously. It makes much more sense as a link in a chain, winding into the past, reaching out into the future. We don’t need to cut off our past to embrace our future. We can if we want to.   If anyone’s going to cut their hair off, they should do it by choice, not under pressure. Wouldn’t we really rather that they get over a little difference as children, than that they are isolated all their childhoods only to fight over much bigger differences as adults? If you force people to conform, they’re probably going to self-isolate more. A little bit of freedom is like the detergent that mixes up the oil and the water, and intolerance is like the salt that drives them apart.*

I don’t have the answers. I wish France and the French–all of them–good luck and godspeed in figuring out how to get along and get on with the real work of life.  I’m not talking about endorsing honor killings here, I’m talking about being allowed to keep what you don’t have to get rid of. Humanity’s differences and nuances are like the shimmer and shine of a ruby–their very ephemeral variance makes clear the hard vivid crystal that’s sparkling. Drink in everyone else, but it’s okay to just be yourself. Maybe I watched too much Sesame Street as a child, but this still seems better than any other model.

*Brimful, I put that in for you. I apologize if I got mixed up!