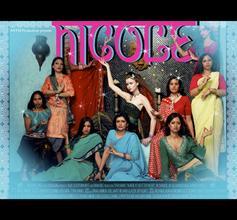 Breaking News which is Meaningless: A brown-ish designer, Ashley Isham, is one of the four people America’s Next (Nowhere Near) Top Model contestants go on a go-see with during this episode’s “challenge” in London. Contrary to every model friend I’ve ever had, THESE hapless girls are being told to wear something in the “style” of each designer, i.e. wear preppiness to Ben Sherman versus the typical jeans and no makeup MY friends rocked whenever they did anything.

The twist? The girls have to assemble their punk, preppy, mod and BOLLYWOOD outfits at some flea market. Winner gets a photo-shoot. A Bollywood photoshoot. (UPDATE: There ’tis, above/left.) Oh my. What any of this has to do with being a supermodel is beyond this bear of little brain. Lovely Malayalee Julie of ANTM3, we hardly knew ye, and ye would’ve rocked the shit out of this trifling test.

With the words, “so, look BOLLYWOOD” still ringing in my ears as four confused girls run off to buy something, anything sequined– but will they look appropriate for a frolic through the Swiss countryside?– I hereby notify you that this train wreck is on UPN RIGHT NOW on the east coast. You mutineers on my home coast still have 2.75 hours to get ready for this spicy jelly (Thanks, ANTM fan Rani!).

Liveblogging, after the jump… END_OF_DOCUMENT_TOKEN_TO_BE_REPLACED

I came over to Sepia Mutiny to write about this and discovered that something similar already is being thoroughly canvassed in comments here. Ah, well.

Recently I’ve marked the onset of each winter by complaining about the people who complain about the de-Christianization of Christmas. My last post on the matter focused particularly on the bizarre spectacle of some Christian extremists who are offended when Wal-Mart fails to greet them with Merry Christmas instead of Happy Holidays, and who assume they are being discriminated against because Christmas, unlike Kwanzaa and Hannukah, didn’t have a section separated from Holiday on the giant retailer’s website. I found their desire to have their religion associated with trees and Barbies very bizarre, concluding “Personally, I’d be annoyed if paintball places declared themselves to be celebrating Holi.”

Then I stopped and thought about whether I’d feel differently in India, where I’d be in the majority rather than in a small minority. Maybe there I’d feel that something was being taken from me, that my place in the majority was being disrespected, if the day before Diwali, someone merely wished me “Happy Holidays” in an attempt to be inclusive of Eid (which this year came the day after Diwali). Can anyone who’s been in India more recently than I recall instances of Hindu holidays being traditionally tied to secular items, and Hindus’ being offended when the secular items were dissociated from the religious holiday? Speaking of commercial acknowledgments of faith, I’m not offended, but I am a little puzzled that my planner notes Christian, Jewish, Muslim and even Buddhist holidays, but nothing of Hinduism. I think the maker, Quo Vadis, is based in Canada, but surely there aren’t so many more Buddhists or Muslims in the Great White North than there are Hindus? UPDATE: Here’s one way to get a multicultural holiday — put bindis on Mary and Joseph. END_OF_DOCUMENT_TOKEN_TO_BE_REPLACED

While shop window designers are offending our readers by sexualizing Indian religious icons, Indian authorities are busy putting the “hi” back into “hijra” – their new hospitality guide makes it very clear to all those dirty over-sexed foreign visitors that they must behave themselves in a supremely chaste fashion when in-country.

A 20 page booklet has been prepared to instruct visitors to Ajmer, Rajasthan, in the “proper” way to respect Indian sensibilities. Here are some of the rules: 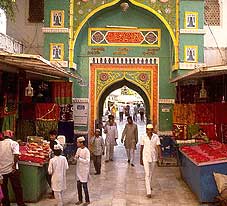 Hotels and restaurants have been instructed to give this booklet out to new arrivals, as if to discourage tourists from staying a moment longer than originally planned. Hotel owners have been asked to post these rules prominently, in large font, on their walls even though it’s self-touching not other-touching that leads to poor vision. A shorter version is being prepared for the back of hotel receipts, perhaps to remind post-coital couples that cuddle time is now officially over. Luckily, these rules do not yet have the force of law, and are “merely” suggestions.

END_OF_DOCUMENT_TOKEN_TO_BE_REPLACED 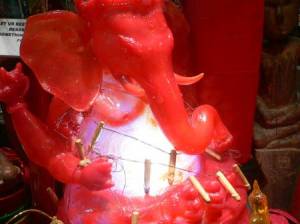 Penises of Paradise: You could be forgiven for thinking a post with this subtitle refers to the prowess of the male Mutineers. Alas, our significant others demand truth in advertising. Actually, our old friend Beads of Paradise has thrown a new wrinkle into its exotica-dealing ways: it’s encircled Ganesh with a garland of penises. A dangle-sutra. A dick-lace.

Color me unimpressed by the gonads on display. Here’s what a real New York set looks like, from this year’s Halloween parade (NSFW after the jump).

END_OF_DOCUMENT_TOKEN_TO_BE_REPLACED

Reader Dhaavak reports that he narrowly escaped a violent in-car mugging at the hands of a criminal pretending to be a construction worker.

I was approaching the stop light when a man with a construction worker’s safety gear stepped out of the side and waved at me to stop… The construction worker walked up to my side and said that he needs a jump for his truck… “Sure guy. Come in”, I said, asking the guy to get in.

… he caught hold of my neck with both hands and started choking me. “You are about to die”, he said as he squeezed.

It was a powerful grip and I started struggling. I had my left leg half way out and I kept trying to push the door open. He was quite strong and pulled me towards him with the neck. I used my left hand to try to pry open his hands and tried to honk the horn with my right knee. “Don’t kick open the door”, he warned, “Hand me your wallet, or I will kill you”. I got a couple of fingers open and then all of a sudden, he let go.

I leaped out of the door and turned around to face him. I noticed my lights were flashing and the horn was honking. I had inadvertently pressed the panic button… [Link]

Do not ever get into someone else’s car or allow some stranger into your own… If someone approaches you for help, lower the window just a little, offer to call on the cell-phone, but don’t let anyone enter your car. [Link]

There’s a silver lining. By nearly getting himself killed, Dhaavak pulls himself off Abhi’s list:

END_OF_DOCUMENT_TOKEN_TO_BE_REPLACED

Yesterday the Canadian government declared that two of its citizens, both humanitarian workers, had been abducted in Iraq. It decided to keep their identities secret for the time being. CBC News reported:

The Canadians were among four people – all humanitarian workers – who disappeared.

Media reports say the other two hostages are a British man believed to be in his 70s, and an American. A British Foreign Office spokeswoman has identified the missing Briton as Norman Kember.

Canada’s Defence Minister Bill Graham says the government will do everything it can to help free the hostages. He did not provide any details.

Foreign Affairs spokesperson Rodney Moore told CBC.ca on Monday that the department is “closely monitoring the situation.” It is “not giving any names,” of the individuals involved, he said, since “we have to respect the families” of the people taken hostage.

Today the identities of the two men were released (thanks for the tip Dhaavak). They are Harmeet Singh Sooden and James Loney:

James Loney and Harmeet Singh Sooden, both members of the Christian Peacemaker Teams, were among four aid workers abducted Sunday at gunpoint, the organization confirmed in a statement late Tuesday.

Mr. Loney, 41, a community worker from Toronto, had spent many years working with the city’s homeless before joining the organization in 2000. He had been leading the group before he was abducted.

Mr. Sooden, 32, a Canadian electrical engineer, was described by his family as being “peaceful and fun-loving and he is known to be passionate about the plight of the underprivileged around the globe.”

END_OF_DOCUMENT_TOKEN_TO_BE_REPLACED

Back in May of 2003 Indian American Biswanath Halder went on a shooting spree on the campus of Case Western Reserve University in Cleveland, OH. CBS news reported at the time:

The 62-year-old man accused of a shooting spree at a prestigious Cleveland university had military training with the Indian army and a grudge against an employee, authorities said Saturday.

Biswanath Halder, armed with two handguns, allegedly killed one person, wounded two others and held police at bay for seven hours Friday in a shiny, swirling building filled with twisting corridors that complicated his capture.

Halder wore a bulletproof vest and a wig glued on “a kind of World War II Army helmet” as he walked the halls of Case Western Reserve University’s Peter B. Lewis Building and fired hundreds of rounds, police Chief Edward Lohn said.

“There’s a trail of blood throughout,” Lohn said. “It was a cat-and-mouse game.”

Halder, accused of killing student Norman Wallace and injuring two other persons during the siege on may 9, 2003, has repeatedly said information he considered vital to his own life’s work was destroyed.

The defence position is that Halder was trying to protect “mankind” from a cyber criminal. [Link]

END_OF_DOCUMENT_TOKEN_TO_BE_REPLACED

In honor of the upcoming

The World Community Grid team has announced the FightAIDS @ Home project. By downloading their screensaver you donate your computer’s idle processing power to the project. The increased processing power will hopefully allow researchers to more aggressively and quickly screen possible HIV-fighting drugs. [Link]

AIDS is an increasing problem in India:

India has had a sharp increase in the estimated number of HIV infections, from a few thousand in the early 1990s to around 5.1 million children and adults living with HIV/AIDS in 2003. [Link]

This software is similar to the SETI @ home project that was popular a few years ago, no more intrusive but with (IMHO) a much higher probability of success. A full explanation of the program follows for the geeks amongst us:

END_OF_DOCUMENT_TOKEN_TO_BE_REPLACED

This is a photo from a NYT article on the sexing up of chess. Their caption was: “The model Carmen Kass in a five-minute blitz match against Viswanathan Anand last year.” I’m sure our readers can do better than that, especially given his … interesting expression.

END_OF_DOCUMENT_TOKEN_TO_BE_REPLACED

Graphic convergence, or looking to Sikh religious tradition for inspiration?