A faux remnant of the British Raj…

Bombay Sapphire is a brand of gin distributed by Bacardi. The name hints at the origins of gin’s popularity in the British Raj. During their administration, the British took quinine in order to protect against malaria in the form of tonic water. This was mixed with gin in order to make a more pleasing and sociable drink of this medical necessity. [Link]

p>… put out a moody, animated, Simba-esque ad some time ago. It updates the look of old Chinese scrolls (cherry blossoms, carp) with dandelions, butterflies and… a bug zapper? It starts off in silhouette like a film studio intro, but gets more innovative from there. Watch the clip. 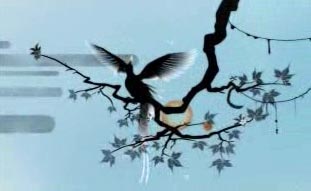 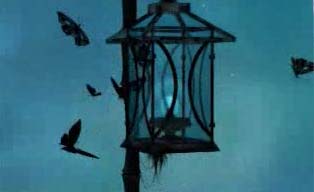 Turns out that not only tonic water, but also vermouth, contain the antimalarial drug quinine. Keep that druggy mixture in mind the next time you watch 007 toss off a martini:

Tonic water was never intended as a cure or preventive for malaria, but malaria is the reason the quinine is in there. Quinine has a bitter taste. To make the stuff palatable when used as an antidote for fevers, legend has it, British colonials in India mixed quinine with gin and lemon or lime. Over time they learned to love the godawful stuff. (You can see this principle at work in a lot of British cuisine…) Quinine is also used, along with other herbs, to flavor vermouth…[Link]

Quinine comes from the bark of the cinchona tree, which grows in the rain forest on the eastern slopes of the Andes. (One begins to comprehend the importance of preserving rain forests.) The Spanish first heard about the medicinal properties of the bark of the “fever tree” from the natives in the early 17th century. According to tradition, the stuff was used in 1638 to cure Countess Anna del Chinchon, wife of the viceroy of Peru, an event commemorated a century later when botanists named the plant. The viceroy shipped a boatload of it to Europe in 1640, and the Jesuits began using it in their missionary work, whence it acquired the nickname “Jesuit’s powder.” For a time religious and national rivalries kept quinine from being universally adopted, but eventually everybody began using it, and many historians today say it permitted the European conquest of the tropics.

Quinine was the only effective treatment for malaria for 300 years. After World War II, however, it was largely supplanted by synthetic drugs such as chloroquine that were safer, more effective, and easier to make. (Though quinine kills malarial parasites in red blood cells and alleviates fever, it doesn’t completely destroy malaria in the body, allowing relapses to occur if quinine therapy is halted.) But some strains of the malarial parasite Plasmodium falciparum became resistant to the synthetic drugs–one reason the global malaria eradication program launched by the World Health Organization in 1955 was declared a failure in 1976–and in some parts of the world quinine has again become the antimalarial drug of choice. [Link]

9 thoughts on “Rollin’ down the street”