If you had spent  yesterday afternoon strolling through sunsoaked downtown Sonoma, a nerve center of California wine country, you might have had your Mediterranean reverie broken by an extremely conspicuous member of desi America: one blue-silk-clad, bejewelled and beflowered Bharat Natyam dancer, desperately trying to find the stage of the Kathmandu Fall Festival.  I can assure you I did not blend in. This is a good thing, because the woman who finally helped us had never heard of Depot Park by name, but took one look at me and remembered that “there’s some kind of colorful festival in that park behind us? That must be what you’re looking for.” 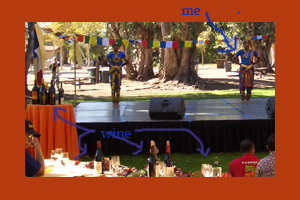 After the set, I looked around the stage for the usual cooler full of water bottles, and was instead greeted by a vision of wine. The usual festival array of Tibetan flags and bells  mixed with bottles and glasses  everywhere, the regular sound of corks popping interlacing with the flute and mrdangam music. Despite booths of frying samosas, the smell of vintage was stronger. Since my family doesn’t drink, we decided to complete the evening with a visit to the video store, and got ourselves the documentary Mondovino. If you’re at all interested in trade, globalization, agriculture, mercantile tradition, France, Italy, Northern California, or, of course, wine, I highly recommend it, though it is a bit long. It’s a film squarely set in Europe and the Americas, featuring titans like the Mondavi family, the ancient Florentine clans Frescobaldi and Antonieri, and a charming elderly Bordeaux gentleman named Hubert de Montille who can’t stand “monolithic thinking.” 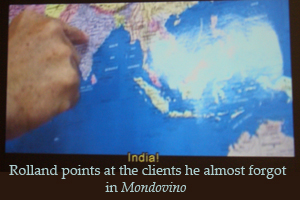 It prominently features a travelling consultant, “the flying winemaker,” who, along with Maryland critic Robert Parker, makes and breaks wines. Michel Rolland caught my attention with a throwaway line when he was pointing out the spread of his clientele on a map,

India?! That’s right, India. The October 17 issue of India Today has a three page spread that, at first glance,  doesn’t bode well for desi oenophilic journalism–even I know that “Brewing the Indian Dream,” is a headline directed at the wrong beverage. But what growth the article reveals within!

One of the kindest things you can say about the Indian wine industry is that it has an awful lot of room for growth. There’s 10 mL per capita consumption of wine in India. Compare that to  8 liters in the United States, 25 liters per capita in the UK, and 60 liters in France. This is one of the few times where stating India’s absolute numbers doesn’t make things sound much bigger.

Most of the less than 775,000 cases of domestic Indian production is by the wackily named Champagne Indage/Chateau Indage. Based in Mahaarastra, the company is setting up wineries in Himachal Pradesh, Andhra Pradesh, Tamil Nadu, Karnatak, and West Bengal, eventually hopening to double production capacity. The other big players are Sula Vineyards and Grover Vineyards, based in Maharastra and Karnataka respectively.

Despite the miniscule domestic market and the almost complete lack of a reputation, India does actually export wine.  “The three big players together export 1 lakh cases worth about RS 15 crore last year to Europe, the US and Asia.  Sula’s Sauvignon Blan sells in France at euro 13 a bottle.  Indage’s Marquise de Pompadour, a sparkling wine, sells as Omar Khayyam in the export markets, while its better-known brance Riviera goes as Chhabri.  These are sold in 44 countries, including the UK, Germany, France, Switzlerand, and the US. While Omar Khayyam is priced at about 14 pounds, Chhabri costs 5 pouds.”

This could mean good things for Indian farmers. Grover’s Kewadkar says that the incredibly popular table grapes only “give the farmer Rs 10 per kg, while the wine grape gives him Rs. 25-35 per kg.”   Sula enters into cultivation agreements with famers who work its lands, and India Today cites the farmer’s  investment of Rs 30,000, the price as Rs 30 per kg/ of wine grapes, and the yields as 4 -6 tonnes per acre. I think that’s about Rs. 110,000 per acre, but the magazines doesn’t make clear how much acrage each farmer gets to work.

It’s clearly a huge business, and if getting in on it can enrich rural Indian farmers, that’s got to be a good thing. But you don’t have to watch much of Mondovino to realize that the little guy often gets screwed in the wine industry. Much of the marketing bluster about a lifestyle that’s connected to the land promotes the artistic creativity and tastes of a few well-pressed suits, usually ignoring the care and attention and palates of the laborers who actually work the fields. Since India is still building its oenophilic traditions from the ground up, it would be great if it could work fair trade principles into the very foundation. That would be some unique branding.

Ahem. If any of you experience accessing the online version of India Today with a paid paper subscription, I’d be much obliged if you got in touch.