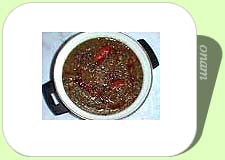 I seem to be the Mutiny’s resident “protest publicist”, so why should today be any different? Join the BJP tomorrow (today?) in Delhi as they take to the streets to express their outrage over the latest issue to grip India (Thanks, Usamidalla):

Harsh Vardhan, a leader of the opposition Bharatiya Janata party (BJP) in New Delhi, accused traders of limiting onion sales to profit from Dussehra and Deepawali festivals. Onion are an important ingredient in almost everything eaten during both festivals. “An artificial scarcity of onion has been created by traders in connivance with the governing Congress party government,” the Press Trust of India quoted Mr Vardhan as saying.

I wish I could be more sympathetic, but as long-time HERstorians are aware, I HATE ONIONS. I pick them out of my food, no matter how microscopically my mother thinks she’s chopping them; this is usually a futile endeavor though, since they inevitably leave their odious taste among the innocent vendaka and pavaka (read: bhindi and karela) who surely deserve better than such a slimy compatriot. So yeah. I won’t be at the protest.

Apparently, I should take the many-layered vegetable more seriously. Not only can it make you cry if you’re chopping it, it can make you cry as it gives YOU the chop:

Onion shortages in India were responsible for bringing down BJP governments in New Delhi and Rajasthan states in 1998.

In several parts of India, onions were trading at double the price of the previous week.

Obviously, in solidarity with her erstwhile countrymen, my mother should refrain from using ooly in her legendary cooking when I go home for almost two weeks on Thursday. It’s the right thing to do, no?

16 thoughts on “Behold, the Power of Onions”