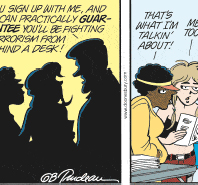 “recruitment shortfalls” in the same breath as Iraq and disasters, you can be assured it’s one of the military’s biggest concerns. Ace mil-blog Intel-Dump frequently highlights the number crunch being faced by the army, and Armchair Generalist analyzed the recent lowering of the educational bar.  I sympathize with the recruiters greatly–we need a military, regardless of whatever goose-chase this or that administration might lead them on. It’s not really their fault that teenagers who don’t need a ticket out of town may question the extent to which the military is really about defending American freedom. That is, it’s not their fault until they start physically harassing a student-veteran for quietly protesting and then get him arrested on his own campus:

More than 100 George Mason University students and faculty members gathered on campus yesterday for a teach-in, six days after an undergraduate was arrested in a confrontation with military recruiters there.

Tariq Khan, 27, said he was standing near the recruiters’ table in the multipurpose Johnson Center at lunchtime last Thursday, holding fliers and wearing signs, including one on his chest that read “Recruiters Lie, Don’t Be Deceived.” One of the recruiters, plus another man who said he was a Marine, began yelling at him, he said, adding that the Marine ripped off his sign. Khan said that after a campus police officer asked for identification, which he didn’t have with him, he was arrested, taken to the Fairfax County police department and charged with trespassing and disorderly conduct.

Khan, a Pakistani American who grew up in Sterling and served four years in the U.S. Air Force, said the recruiters, and later the campus police, made disparaging comments to him about Middle Easterners.

Daniel Walsch, a university spokesman, said that Khan “was considered to be distributing literature,” which requires a permit, and that he was asked to leave the building.(Link)

The ACLU of Virginia wryly notes that the arrest occurred “at a public university named after the person who may be most responsible for the Bill of Rights.” Whether or not recruiters lie, George Mason U. is being patently untrue to its namesake’s ideals if it fails to urge the Fairfax D.A. to drop charges against Mr. Khan. (Link.)

The ACLU is defending Khan, who has a court date of Nov 14. (Link). Last week he gave a speech at the rally:

First of all I want to say that what happened to me last Thursday is not an isolated incident. . At at least three different colleges in the last week alone – the University of Wisconsin at Madison, Holyoke Community College in Massachusetts, and here at George Mason University – students engaged in non-violent counter-recruitment were met with police repression. . .And here at GMU I was harassed and assaulted by police and right-wing vigilante wannabe’s simply for standing in the JC with an 8×11 sign taped to my chest that said “Recruiters lie. Don’t be deceived.” Then I was charged with trespassing and disorderly conduct. While the police and vigilantes were brutalizing me, other right-wing students were cheering them on and shouting “Kick his ass!” . .Officer Reynolds, the goon who arrested me told me that he had to handcuff me because of 9/11. He said, “I didn’t know who you were, and what with 9/11 and all, there’s no telling what you’d do.” So because he didn’t know me, he had to assume that I’m a terrorist. Another officer at the GMU police station shouted at me, “You people are the most violent people in the world! You’re passive aggressive!” What does that mean? Who are “you people”?

Besides the fundamental issue of preventing a student from engaging in free speech on a public campus, which I thought was settled over 40 years ago, there is the issue Khan brought up, a crystalized example of why we need first amendment rights to debate public policy and government actions in the first place–do recruiters lie?

It’s a question all Americans need to think about–if they do lie, they’re lying in our collective name. During graduation season earlier this year, Doonesbury jokingly and somewhat mildly broached the subject of recruitment earlier this year, only to be followed by a news report indicating that truth is worse than fiction:

But two recruiters from Colorado have been suspended as the Army investigates accusations that they encouraged a teenager to lie and cheat so he could join up. Reporter Rick Sallinger of Denver TV station KCNC reports that 17-year-old high school journalist and honor student David McSwane is just the kind of guy the military would like.  . . .For one thing, he told his recruiter, he was a dropout and didn’t have a high school diploma.

No problem, McSwane says the recruiter explained. He suggested that McSwane create a fake diploma from a nonexistent school.

In May the army had to order a one-day halt in recruitment to review procedures, with 480 allegations of improper conduct to investigate. (Link) Swane recently followed up his adventure with a feature in Denver Westword. Besides this kind of basic dishonesty, which is essentially targeted at the military the recruiters serve, there is the issue of misrepresenting terms and natures of service to young recruits. AWOL resisters — or deserters — in Canada have repeatedly brought up the terms they say they thought they were getting:

Among the things Johnson was promised were a house to live in, a dental plan, medical coverage, more than $40,000 for college–and best of all, the recruiting officer told him, he wouldn’t even have to fight; if he liked, they would be happy to file the paperwork necessary to find him a nice desk job somewhere, no problem. Looking back at where he was in life and what the Army was promising him, Johnson still feels there was no way he could have refused. He was willing to do whatever they wanted, short of having to go to Iraq, and apparently, that wasn’t a problem. (Link)  Cliff Cornell, from Arkansas, was stationed at Fort Stewart, Georgia. He joined the Army with the promise from a military recruiter that he would receive a $9,000 sign up bonus and job training. “Ninety per cent of what the recruiters tell you is a pack of lies,” said Cliff. Army recruitment techniques amount to entrapment, targeting young men from poor families, said Cornell. (Link.)

These are serious allegations, and scream to be examined thouroghly, if skeptically. It’s of particular concern to immigrant communities, which are now prime recruiting grounds. (See previous posts.)  A court martial started last week for a recruiter accused of facilitating illegal immigration to gain recruits. Perhaps veteran Tariq Khan instead deserves kudos for patriotically stirring up debate and discussion?

44 thoughts on “Trespassing at Your Own Public University?”