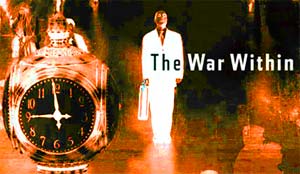 I recently dismissed an upcoming Sarita Choudhury effort because she plays yet another brown terrorist.

But the high-def production, now called The War Within, also stars cutie-patootie Nobel scion Nandana Sen, who played the sister in Black. It also stars our cereal Cyrano, Aasif Mandvi. Although the Village Voice pans the Mark Cuban-financed movie, now I have to see it. That’s a double chocolate fudge sundae of pillow lips, subcontinental curls and attitude, and if anyone tells you they don’t see questionable movies just for the stars, they’re lying.

The War Within follows in the introverted footsteps of Hassan (co-writer Ayad Akhtar), a Pakistani wrongly imprisoned and tortured for terrorist affiliations… The film’s title may seem to spill the beans–will the watchful Hassan carry out his mission or renege after enjoying America and flirting with Sayeed’s ravishing sister (Nandana Sen)?–but in fact, whatever inner conflict rages looks to us like moping and staring blankly out at the East River. (Time killed gazing from the beach or dock is a telltale sign of indie floundering.)

… Hassan undergoes a radical transformation and embarks upon a terrorist mission, surreptitiously entering the United States to join a cell based in New York City. After meticulous planning for an event of maximum devastation, all the members of the cell are arrested, except for Hussan and one other. With no alternative and nowhere else to turn, Hassan must rely on the hospitality of his former best friend Sayeed, who is living the American dream with his family in New Jersey… Hassan takes advantage of Sayeed’s generosity while plotting his strategy and amassing materials to create explosives. Eventually, Hassan’s skewed religious fervor clashes with his feelings for Sayeed and his family, especially Sayeed’s sister Duri. [Link]

p>The movie opens in NYC this weekend and in LA next weekend.