New tipster FOBish informs us of yet another way India eats its young: Child Sari Weavers. 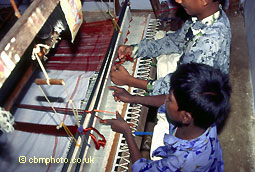 It is estimated that there are around 10,000 children in the districts of Kanchipuram and Thiruvannamalai in Tamil Nadu work in the silk industry.

There are over 100,000 looms set up in individual homes on which these famous silk saris are woven. Many of these saris cost several thousand rupees…

These children work every day of the week for up to 10 hours a day.

Savarnam, an owner of two looms rejected all accusations of exploitation. Instead he said that they were helping these poor people by giving them employment.

“We make hardly any profit. The cost of raw material is high. Added to that we face competition from cheap copies of Kanchipuram saris,” he argued. 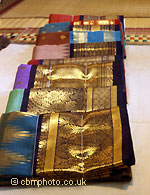 Riiight. Many, if not all these children are essentially bonded laborers working to repay a loan their parents were forced to take. Human Rights Watch reports:

Karnataka, in the south, is India’s primary producer of silk thread. There, production still depends on bonded children. Most are under age 14 and are Dalit or Muslim. In 2001, the state government promulgated an ambitious plan to eliminate all child labor, but it was not in operation at the time of Human Rights Watch’s investigation one year later. [link]

A detailed examination of how bonded child labor works can be found here.So why saris? 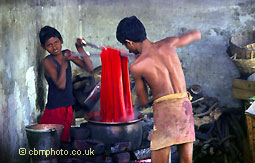 Child labour in silk weaving is associated with a certain type of sari, the korvai or `contrast’. In this intricate sari, the design and often the colour of the borders are different from those of the main body of the cloth. Three shuttles are needed: the weaver operates two, and the assistant the third. In this labour-intensive industry, children are often employed as assistants. A child is able to perform the tasks required as efficiently as an adult, can be paid much lower rates, and is likely to remain with the weaver for longer periods than a mature counterpart, who will acquire skills only to start his own business. On the demand side of the labour market, the reasons for a weaver to prefer a child rather than an adult assistant appear clear enough.

The supply-side has its own indefatigable logic as well:

Time and again, Kerala is cited as having the lowest incidence of child labor in India. Whether causation or not, the state’s high literacy rate is often pointed to as a reason. 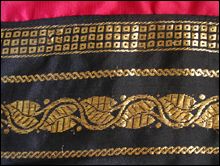 What they shopped for were Kanchipuram silk saris, considered the Versaces of southern India, because one piece can cost $1,000. Many will last a lifetime with good care, and all represent status…

Each sari is individually woven on a hand loom, so no two saris are exactly the same. “The Kanchipuram sari is a limited edition,” says S. Ramesh, managing partner of a silk store in Panagal Park. “Being hand-woven, some little imperfections will be there, but that adds charm to the sari.”

Other defining features of the brocade are that the silk yarn is dyed before weaving, threads used are 3- to 5-ply, and the contrasting colored border and body are interlinked by an intricate process called korvai. The motifs are woven in special “gold” threads made by taking one or two fine silk threads, winding extra-fine silver wire/thread around it, and then dipping the resulting filament in 24-karat gold…

Weaving is not a well-paid trade. The cheapest component of a handcrafted Kanchipuram silk sari is the labor. Weavers make about $14 for a sari that retails for $70 and takes nearly a week to make.[link]

Of course, if you’d like to buy a Kanchipuram silk sari, you don’t have to wonder if kids handled the looms. They’ve got pics to prove it.

32 thoughts on “Kid Made, Adult Approved”