Tonight, at the stroke of the midnight hour, marks the one year anniversary of the launch of Sepia Mutiny.  We would like to thank our readers (especially those who have left insightful comments) for taking time out of your busy schedules to participate.  Loss of productivity at your jobs is our collective gain.  In the past year our website has received just under 1,000,000 visits without a single lawsuit filed against us.  That alone is cause for celebration.

But alas, all is not well.  Fomenting a mutiny in the Blogosphere takes a physical and emotional toll on one, as some of the bloggers who visit our site know well.  I won’t presume to speak for my fellow mutineers, but my own life has fallen into a downward spiral worse than that faced by any heroin addict.  Hours spent attempting to fight the good fight has transformed me much as Mangal Pandey was transformed in his day: 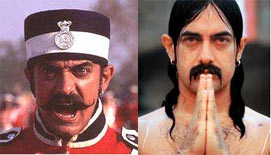 Those who are familiar with blogosphere lingo know that the term “Pajamahadeen” is sometimes used to describe a blogger.  The two pictures below were taken only two days apart.  On the left you see me on August 6th of last year.  On the right is my countenance as it was on August 8th.  Just two days of Mutiny had taken a heavy toll.  I don’t really go out in public anymore, and hopes for a “girlfriend” are quickly fading.  Frankly, you’d be disgusted by my appearance.  What is worse is that the delusions of grandeur I suffer have led me to adopt the name “Mangal Pagal”.  Even my phone bill has that name.  Again, I thank you all sincerely and hope you keep visiting our site.  Please be aware though that blogging comes with a heavy price.  I ain’t pretty no more. 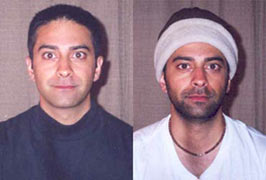 38 thoughts on “The Ravages of Mutiny”