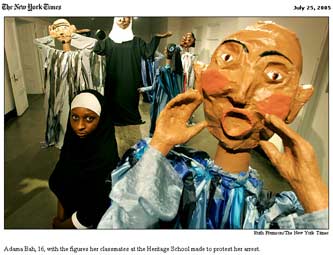 One of the two young girls picked up by the government (on suspicion of terrorism) re-appeared in her Harlem neighborhood in May. Sixteen year old Guinean immigrant Adama Bah was released by the Feds without explanation (and she’s under court order not to talk about it). Her friend Tashnuba Hayder was deported back to Bangladesh. Her classmates missed her and let her know recently via an impressive art exhibit they prepared to tell her story. The New York Times reported a few days ago (tip from Priya):

When Adama Bah’s schoolmates decided to make a public artwork project about her case last spring, she and another 16-year-old girl were being held by the federal government after it had identified them, without explanation, as potential suicide bombers.

“We didn’t know if we would ever see her again,” said Kimberly Lane, who was then an art teacher at the school, the Heritage School in East Harlem, where many viewed Adama’s detention as unjust and incomprehensible. “This was a way for the students to use art to speak out at a time when a lot of people, including adults, were afraid to do anything.”

The result towers over anything that most people would expect high school students to produce. At Columbia University’s Teachers College, where the work is on display through Thursday, the director of art education, Prof. Judith M. Burton, says it reminds her of Rodin’s “Burghers of Calais.”

Life after being thrown in jail without explanation isn’t easy on a poor immigrant family as you can imagine:

“I asked the students why are they doing that,” Adama recalled. “They said they just wanted to let my story be heard and help me out.”

These days, Adama acknowledges that her family is in difficult financial straits. The telephone has been shut off and her mother stays late at her trinket stand in Brooklyn, trying to earn enough to buy groceries for Adama and four younger children. But Adama was bubbling over about her summer job, reading to children at Bellevue Hospital Center.

10 thoughts on “The Burghers of Harlem”