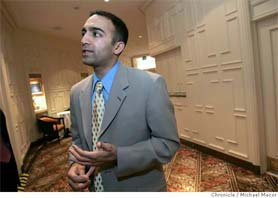 Knowing that I am a lifelong die-hard 49ers fan, my friend Sandeep S. tips me off about the ambitious young Paraag Marathe. Who is he and how did he end up in the 9ers front office at the age of 28? The San Francisco Chronicle reports:

Anyone following the 49ers’ upheaval the last month [NSFW] ran across the name of Paraag Marathe. The assistant to the general manager’s rapid ascension within the 49ers caught the notice of the rest of the league during the team’s recent shakeup.

Who is this 28-year-old whiz kid? How did this man with an MBA from Stanford with little grounding in football become one of four people choosing the 49ers’ next coach and establishing the direction of an organization adrift? Because nobody knew the answers to these questions, Marathe became a lightning rod for the general dismay with the organization among columnists, radio talk-show hosts and even the NFL set, who openly wondered what he was doing in the team’s brain trust.

Marathe (pronounced mah-RAH-tay) became the unwitting victim of what many perceived as co-owner John York’s NFL ignorance. It’s a fact this business consultant from San Jose, via Cal and Stanford, impressed York after then- general manager Terry Donahue brought him in and was a big influence on the coaching search. But he is not expected to play a major role, as yet, in the organization.

9ers fans have always demanded excellence. Should we give this new kid a chance? The 9ers former owner Eddie DeBartolo was the MAN. He made his players happy at any cost and they showed their appreciation on the field with unmatched play. His brother-in-law, John York, pushed him out when Debartolo ran into mob related legal problems. York is a business man with no heart for football and has driven the 9ers into the ground.

The industrious Marathe won the admiration of York, a licensed pathologist who admittedly relied heavily on his business background (running laboratories and race tracks) to steer his ownership of the 49ers.

“John is a scientist,” a source close to York said on the condition of anonymity. “He loves proofs and statistical models.”

In his projects, Marathe created graphs and charts that impressed York. After working with the 49ers for 18 months, Marathe befriended Jed York, John’s eldest son. Seemingly, as the 23-year-old Jed became more visible at the 49ers’ headquarters, eventually joining high-level meetings, so did Marathe.

Marathe’s ascension coincided with the departure of Walsh and director of football operations John McVay, which could have been more than a coincidence. Privately, neither liked the statistical approach Donahue espoused. Marathe and his computer shot down Walsh and McVay’s trade proposals during the 2003 draft. This didn’t sit well with either man, who had built the 49ers’ success partly on their impulses.

Ouch. You never f*ck with Bill Walsh’s instincts. Who does this kid think he is? As a scientist I can see where he is coming from. Still though, football is about going with your gut. All of us that are addicted to managing our Fantasy Football teams in the fall know this all too well.

Nolan was hired, and even though Marathe will have significant say in salary-cap matters, he’s not the power broker many assumed he would be when he was included in the interview process.

“I think Paraag is clearly the salary-cap person and negotiator, I don’t think at this point in time that Paraag has the experience to be the general manager,” York said. “I think over time that he could.”

Next year I am going to email my Fantasy Football standing to York. Paraag ain’t got nothing on me.