Separatists in Manipur shot a man in the knees because he violated their ban on chewing zarda:

Arun Thakur is battling amputation at an Imphal hospital after he was shot at close range on his legs by suspected separatists on Wednesday. One of the assailants reportedly shouted at the barber from Bihar, who has made Imphal his home: “You are punished for chewing paan.” The attack comes a day after the outlawed separatist Revolutionary People’s Front (RPF) imposed a ban on the sale and consumption of chewing tobacco products in Manipur…

Tobacco products locally known as khaini and zarda are a common form of addiction among many Indians, including a vast majority in Manipur… “The ban is meant to counter India’s evil designs of getting the younger generation hooked to such dangerous substances,” an RPF statement said.

Encouraged by the rebels, frustrated desi readers worldwide have threatened to ‘bust a cap in Random House’s ass’ if they publish one more book with mehndi on the cover.

END_OF_DOCUMENT_TOKEN_TO_BE_REPLACED

The abnormally chubby baby about whom Apul posted did not survive his encounter with an Indian hospital:

Eleven-month-old baby Lokman Hakim, who weighed over 20 kgs, choked to death at SSKM Hospital on Sunday…

Lokman’s mother Ganera Bibi was feeding him mashed boiled rice on Sunday afternoon… But he started getting hiccups soon after his meal. Doctors suspect the baby had “overeaten” and food particles had got stuck in his trachea due to the lack of muscular co-ordination.

“I don’t know what happened. My son had never been given rice before. We brought him all the way from Murshidabad for treatment, and now he is no more,” said the shocked mother.

END_OF_DOCUMENT_TOKEN_TO_BE_REPLACED 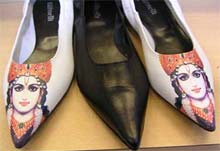 Beer, thongs, bikinis, toilet seats, sandals and now shoes: it seems the entire inventory of your local Wal-Mart ends up stenciled with Hindu art at some point. Emboldened by his success, the activist who got a brewery to drop its Ganesh beer is now opposing women’s shoes in France displaying an image of Rama:

A pair of women’s shoes allegedly showing Lord Rama made by French shoemaker Minelli has angered a pro-Hindu website, which has urged supporters to begin a letter-writing campaign to the shoemaker protesting against the product…

Expatriate attorney Brij Mohan Dhir has supported the bid, and is himself mobilizing opinion to protest production and marketing of the shoe… The San Francisco-based activist has circulated a copy of the letter widely on the Internet. If Minelli doesn’t back down, he is considering filing a complaint in the European Court of Human Rights…

The BBC has made it to the top of the complaints charts with their new entry straight in at number one: Meera Syal’s much vaunted “Life Isn’t All Ha Ha Hee Hee” once again shows their inability to provide a positive portrayal of Hindus in Britain. Containing a series of cheap and insulting digs at Hindus, this programme continues the tradition of the Western media’s denigration of Hinduism and Hindu culture.

HHR needs to get in line, because Syal is an equal-opportunity humorist. Her Bhaji on the Beach screenplay, oft-maligned for ‘bashing men,’ is a Girls’ Night Out by definition.

END_OF_DOCUMENT_TOKEN_TO_BE_REPLACED

Bangladeshi-American rocker Arafat Kazi says the Dhaka rock scene is incestuous (via Tales from the Subcontinent):

… if you have one death metal band in Dhaka, there will be five death metal bands in Dhaka a year from now simply from osmosis… Elephant Road is a street which has three stores which had all kinds of LPs and later on CDs which they would copy onto cassette for you for a fee. This is how we ALL got our music until like 1999 or 2000. No CDs till then either… you had a band called The Attempted Band (featuring yours truly among others) which had the hottest girl in town and an enormous fat fuck who knows EVERYBODY in Dhaka city. All the bands that we knew clustered around us because we were doing shows, and eventually they started kicking ass as well. This could NOT have happened in India, where if you have a band in say Gujrat, there’s no fucking way it’s going to get to Cochin…

A big part of why you don’t see Paki or Indian bands doing rock music is because they both have HUGE cinema song industries (esp India). Why the fuck would Channel V show a rock band which nobody cares about when they can just as easily show a garam masala lust-laden video?

He also does a hilarious, purposely desi-accented homage to Wu-Tang Clan’s ‘Shame on a N*‘ which reminds me of ’Drop It Like a FOB.’ Listen and weep.

Kazi’s a member of a rock band called the Watson Brothers:

END_OF_DOCUMENT_TOKEN_TO_BE_REPLACED

The Pacific News service features an essay by Sandip Roy and his feelings about the soon-to-be-over Asian Pacific American Heritage month:

Oops, I did it again. May is almost over and I forgot to feel special. It’s Asian Pacific American Heritage month, and I have nothing to show for it. I didn’t learn to wear a kimono or cook pad thai or read Amy Tan.

Public television and libraries are just bursting with Chinese memoirs and Filipino writers and Japanese origami demonstrations. Growing up in Calcutta, I was just Calcuttan. But with every boarding pass I received on my way to the United States, my identity ballooned — Calcuttan, Indian, South Asian and, finally, Asian. Now I get a whole month, and I’m at a loss as to what to do with it.

True, San Francisco is a city where Asian political power is nowhere close to representative of the city’s Asian population. Only one Asian remains on the Board of Supervisors, while another high-profile Asian city official, the assessor, recently handed in her papers.

Well I feel like after reading that I should find out for myself what Asian Pacific American Heritage month is all about, so I googled it and found this site.

In May 1990, the holiday was expanded further when President George H. W. Bush designated May to be Asian Pacific American Heritage Month. May was chosen to commemorate the immigration of the first Japanese to the United States on May 7, 1843, and to mark the anniversary of the completion of the transcontinental railroad on May 10, 1869. The majority of the workers who laid the tracks were Chinese immigrants.

Asian Pacific American Heritage Month is celebrated with community festivals, government-sponsored activities, and educational activities for students. This year’s theme is “Freedom for AllÂ—A Nation We Call Our Own.”

END_OF_DOCUMENT_TOKEN_TO_BE_REPLACED

Somewhere, a bench is about to have a really famous butt on it:

Indian batsman Sachin Tendulkar will be out of action for at least four months after undergoing surgery on his troublesome elbow.

The 32-year-old batsman had the operation in London on Monday.

Karunakaran Nair, the secretary of the Board of Control for Cricket in India, said he could not say how long Tendulkar would be out for…

He first suffered what was originally described as “tennis elbow” while batting in the nets in the Netherlands last August.

Surgeons say that the procedure for a “condition affecting the extensor tendons” was complication-free. Tendulkar is expected to make a full recovery. END_OF_DOCUMENT_TOKEN_TO_BE_REPLACED

This one may kick up a debate. Was the owner being racist or incredibly ignorant in his political correctness? The Star Tribune reports (free reg. required):

A federal lawsuit filed Tuesday contends that suburban (near Minneapolis) car dealer Iten Chevrolet has engaged in a pattern of racial discrimination, including instances in which managers used racial epithets in describing employees and customers who were members of minority groups.

The dealership is a longtime fixture in Brooklyn Center, and sits near some of the metro area’s most racially diverse neighborhoods. It faced similar complaints in the 1990s, reaching an of-court settlement of allegations that racial stereotypes and off-color jokes were common at the company.

Iten’s attorney, William Clelland, called the latest accusations “outrageous” and “lurid.” He said the lawsuit was filed after an attorney for Ron Budhram, a fired employee who is Indian-American, set Tuesday as a deadline for the dealership to agree to a $450,000 settlement.

So apparently Budhram was let go because the owners didn’t appreciate the fact that he moonlighted on the side (as others did as well he claims). The lawsuit however goes into details as to what Budhram cited as discriminatory:

Budhram said the dealership had a racially discriminatory atmosphere during his employment, much of it directed at blacks. In one instance, the suit said, a business consultant at the dealership came across a group of minority and white employees as they were eating and asked, “Why are all the dark-skinned employees standing around?“

END_OF_DOCUMENT_TOKEN_TO_BE_REPLACED

Yes, we’re beating the M.I.A. horse into a thick, gluey paste, but this is about free stuff, so there will be no apologies:

END_OF_DOCUMENT_TOKEN_TO_BE_REPLACED

I’m almost done with it and it’s fantastic; Babyji may accomplish what even my father couldn’t– it might persuade me to study physics. Intrigued? You should be. What other novel contains a come on like, “I want to collapse my wave function into you.” Now that’s hot.

END_OF_DOCUMENT_TOKEN_TO_BE_REPLACED

He died in a London hospital this afternoon, his office said. The cause of death was unclear, but a spokesman said the Indian-born producer had suffered from stomach problems over the past year…

Along with his creative partner James Ivory, he made such acclaimed period films such as Howards End, A Room With A View and Remains of the Day…

Merchant was born in Mumbai, formerly known as Bombay, in December 1936 and educated in New York. [BBC]

Merchant… had been unwell for some time and recently underwent surgery for abdominal ulcers, according to Indian television reports.

Merchant and Ivory, an American, made some 40 films together and won six Oscars — four for best picture — since forming their famous partnership in 1961 with German-born screenwriter Ruth Prawer Jhabvala. [MSNBC]

Merchant left behind his family as well as long-time partner James Ivory. He focused on producing but also directed one of my favorite films, Muhafiz (In Custody). (Has anyone truly lived until they’ve seen Shabana Azmi sing a ghazal Umrao Jaan-style?) His partner and Ruth Prawer Jhabvala helped Merchant churn out a lengthy body of work.

Merchant not only adapted great books by Henry James, E.M. Forster and V.S. Naipaul, but also helped establish the careers of a new wave of renowned English actors, including Hugh Grant (“Maurice”), Helena Bonham-Carter (“A Room with a View”) and Emma Thompson (“Howards End”)… The Merchant-Ivory model was soon widely imitated, as filmmakers as diverse as Martin Scorsese (“The Age of Innocence”) and Ang Lee (“Sense and Sensibility”) turned their cameras toward classic books.