Just who is Rambo? From Wikipedia:

The first movie begins with the titular character – John Rambo, played by Sylvester Stallone – returning from the Vietnam War and searching for an old Army buddy. After discovering that his friend had died of cancer, and being escorted to the town limits by the local sheriff Will Teasle (Brian Dennehy) who “doesn’t like his type”, Rambo defiantly walks back into town. Sheriff Teasle arrests Rambo, and brings him to the station where he can be “cleaned up”. During a forced shower with firehose, where he is beaten, Rambo has a wartime flashback of his experience as a POW in Vietnam. Temporarily losing touch with reality, Rambo escapes from prison and hides in the local mountains.

So basically we have a guy with a lot of guns who has lost touch with reality and fled to the mountains (see here for example). Hmmm, where to send him next? Well why not have him shoot some Muslim terrorists, and film it partly in India? From Rediff.com (tip from Punjabi Boy):

The shooting for Rambo IV, also titled Holy Wars, is scheduled to begin in Sofia, Bulgaria, in January 2006.

Filming also scheduled in the US and — you better believe it — India!

…an early draft of Holy Wars, freely viewable online, revolves around a different race-situation, one which Stallone has been alluding to ever since 9/11 happened.

John Rambo, a committed family man, is an environmentalist working at the UN headquarters in New York. Suddenly, the UN HQ is besieged by Islamic terrorists. The sadistic fundamentalists are holding the world to ransom. There isn’t a better man to go after the bad guys than Rambo, but the tale sees a twist because he knows his Afghani-adopted son is part of the terrorist squad.

What the F%ck! The John Rambo I have grown to love could never be a “family man” and an environmentalist working at that sissy U.N. What is this crap? But it gets worse. Who will play Rambo’s adopted Afghani son if the filmmakers have their way? I’ll give you a hint. He has six fingers.

Rambo’s Afghani-American stepson (or his Afghani-adopted son, going by the draft we read) is slated to be played by — hold your breath — Hrithik Roshan!

The treatment note describes the character as similar to Altaf in Mission Kashmir, and calls him ‘in many ways, the Rambo for the twenty-first century.’

Talking about Hrithik, it mentions a resemblance between him and Stallone himself, and talks about how the young Indian stud currently has all the staying power needed to make the first truly big crossover Indian-American film.

Taking things into perspective, it’s important to remember than nothing has been signed yet — there have been no official announcements regarding the cast of the film, with the obvious exception of the inevitable leading man, Sly himself. 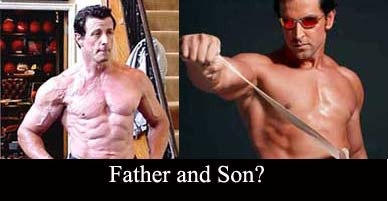