It always begins like this. The outbreak starts in one city or culture and slowly spreads. The youth are often the first to be infected. It builds slowly at first and then before you know it even you neighbors are infected. From MSN.com (tip from Amit): 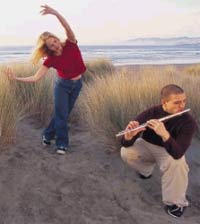 Johannesburg– They sing songs from “Sholay” and “Kal Ho Na Ho”, they dance, they emote, complete with the glitzy costumes so typical of Bollywood stage shows. But they are not Indian!

In fact, the team comprising a pair of Chinese American twins, one girl from Italy and two of French-German stock never fails to amaze audiences with its Bollywood-inspired performances.

And now twins Michael and Martin McNally; sisters Celeste and Joanna Richard, who are half German and half French; and Italian Victoria Satanassi are here.

They first met after becoming volunteers with the charity Action in Focus, which hosts medical camps and other social services to the needy in the East African country of Kenya.

“We wanted to help raise funds in whatever way we could, and we started with performances in pop. But then the Indian community in Kenya inspired us to look at Bollywood, which became a real hit.

I really have mixed emotions about this. Before, when I met a girl I was into, I used to take her to a nearby park and “test her out.” Could she run around the trees fast enough that it would be at least a minor effort for me to catch her? Could she sing a song in a voice strangely not her own? Now when I go to the park I feel like I am increasingly going to be surrounded by couples of other cultures doing the same thing. I am not sure if I can handle that type of change.

The group admits that during tours of Canada, Dubai, Britain, Kenya and even India the audiences always react with surprise at seeing an international group of white performers doing Bollywood items.

“The reaction in India was particularly amazing,” said Michael.

“We met some people from the film industry there and were even offered a part in movies. But to be honest, we can make more money for the charity by performing as we do than in the time it would take for involvement in a Bollywood production.”