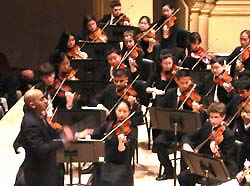 Imagine, if you will, being a desi kid with a passion for the claviers and chords of Western classical. You’d be sick of hearing, ‘Why can’t you be like Mr. Malhotra’s son, the doctor,’ for the last 20 years. Tired of uncles asking why you shave your head, where you disappear to all summer, why you’re never free on weekends. Isn’t it risky, a pauper’s life? Could you support a dutiful wife? I don’t know, beta, this whole thing is so phoren.

Imagine that in your 15-minute Warhol, you could perform in the most storied hall in America, painting away every doubt-hound dating back to high school. Your hands would throw auditory pottery, now throbbing delicately like gills, now stabbing angrily at imaginary boxers. Fifty pairs of eyes would look to your space needle for reassurance, tempo, tone. Just you, a riser and your musical crew: o captain my captain, carpe musicum, and they’d respond. A forest of swaying toothpicks, egg slicers and split-tongued shoots would churn buttery tones into a towering aural chasm.

On that day, you could be forgiven for feeling like Salieri even if you sounded like Mozart. So you’ll understand why I’m so proud to share with you my cousin Ankush Bahl’s Carnegie Hall debut. On Sunday, he conducted Brahms’ Tragic Overture for the best youth symphony in America. He did it without sheet music, a zipless conduct.

… the Youth Symphony also promotes young professional musicians in the early stages of their careers. One example is Ankush Kumar Bahl, the group’s assistant conductor, who made his Carnegie debut leading an energetic reading of the Brahms overture with clear authority and enthusiasm…

Normally I’m far from a classicist in the arts. Tweeter tones sully themselves sadly against my shores, and the only Tragic Overtures I’m familiar with are my attempts at romance

But Ankush conducts with such drama, he’s a hoot to watch. So, there were first times all around.

As he left the stage in a herky-jerky, post-performance tremble, he turned and saluted his family in the box seats at stage left. (Just say you know the conductor, he said. He’d arranged the best seats in the house.) But he added an even more fitting touch. In an industry which pays deep obeisance to tradition, in a hall with a lily-white fundraising committee of Wall Street billionaires, he had the balls to begin his bio with this shout-out: ‘Indian-American Ankush Kumar Bahl…’

Despite Zubin Mehta, it’s a gutsy call. Can you dig it?