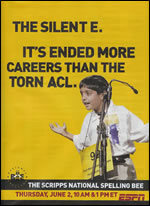 Have camera, but where to travel?: Each year insurance broker Aon releases a map that highlights the risks of filming in every country on the planet (via Filmmaker Magazine). Filmmakers use it to avoid hotspots that could derail production, while reality television producers no doubt use it to locate trouble-ready destinations. This may explain why such programs are increasing their visits to India, which ranks rather poorly in the survey.

Kleenex shortage on the set: There’s a new desi independent film entitled “Anokha.” Based on the trailer, it appears to be about crying, and nothing but crying.

Letter arranging contest: The 78th annual Scripps National Spelling Bee is June 1-2. Catch all the dorky goodness live when ESPN broadcasts the event on Thursday at 10 a.m. and 1 p.m. EST. The cable network’s print ad is to the right.

Revenge of the rack: Shilpa Shetty versus Mallika Sherawat. Discuss.

10 thoughts on “Showbiz round-up: Where to shoot without getting shot”