Sometimes it’s easier to accept torture by thinking, “oh they aren’t U.S. citizens so it doesn’t matter as much.” Human Rights Watch this week focused attention on the case of two Pakistani-American brothers who “disappeared” while in Pakistan. The Seattle Post-Intelligencer reports: 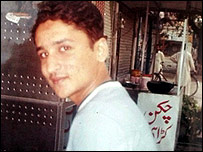 An international human rights watchdog has slammed the United States for allegedly allowing FBI and Pakistani intelligence officials to illegally detain and torture two brothers claiming to be U.S. citizens of Pakistani descent.

The two men say they were held for several months and harshly interrogated by Pakistani intelligence and U.S. FBI agents on suspicion of Islamic militant links. They claim they were later abandoned, blindfolded, on a street in the southern city of Karachi.

“It is outrageous that Pakistan abducts people from their homes in the middle of the night and tortures them in secret prisons to extract confessions,” said Human Rights Watch’s Asia director, Brad Adams.

“The United States should be condemning this, but instead it either directed this activity or turned a blind eye in the hopes of gaining information in the war on terror,” Adams said in a statement.

The Human Rights Watch website has more on the two:

When queried about the status of the brothers and the role of the FBI, the U.S. Consul in Karachi in March replied: Â“We are aware of the reports indicating two American citizens are missing, or Â‘disappearedÂ’ in Pakistan, and we are looking into them. Due to Privacy Act considerations, we are unable to provide additional information on these two individuals. The safety and security of Americans overseas is of paramount importance to us, and we continue to work both here and abroad to provide all possible assistance to our citizens. I refer you to the FBI for any information on their involvement.Â”

Â“While U.S. officials say the safety and security of Americans overseas is paramount, the U.S. government didnÂ’t lift a finger to help the Afzal brothers until their cases were reported in the international press,Â” said Adams. Â“The U.S. knew exactly where the brothers were all along, while their family was scared stiff, not knowing whether they were dead or alive. This is profoundly wrong and should send a chill up the spine of every U.S. citizen living overseas.Â”

And while we are on the subject of Human Rights abuses, Amnesty International came out with its 2005 annual report this week.

Governments are betraying their promise of a world order based on human rights and are pursuing a dangerous new agenda, said Amnesty International today as it launched its annual assessment of global human rights.

Speaking at the launch of the Amnesty International Report 2005, the organization’s Secretary General Irene Khan said that governments had failed to show principled leadership and must be held to account.

“Governments are betraying their promises on human rights. A new agenda is in the making with the language of freedom and justice being used to pursue policies of fear and insecurity. This includes cynical attempts to redefine and sanitise torture,” said Irene Khan.

This new agenda, combined with the indifference and paralysis of the international community, failed countless thousands of people in humanitarian crises and forgotten conflicts throughout 2004.

Amnesty slammed the U.S. and its torture practices but slammed countries all over the globe (obviously including South Asian countries) as well.

One thought on “More detentions”