One of my fondest memories from childhood is of playing Monopoly and crushing my friends. I was a ruthless landlord. I’d shoot the dog with the revolver from Clue if he couldn’t pay. Now there is Desi-opoly, UK Desi-opoly to be precise. From the Yorkshire Post Today: 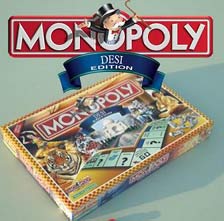 Called Monopoly UK “Desi” Â– the Asian term for homeland Â– it will feature Indian icons such as the Taj Mahal and Bollywood, as well as British streets famous for Asian culture, such as London’s Brick Lane and Manchester’s Wilmslow Road.

The traditional counters of top hat, dog, racing car and boot are to be replaced with three-wheeled scooters, tigers, cricket bats and Indian sweets.

Creator Gurdip Ahluwalia, who came up with the idea while working for games manufacturer Hasbro, is still seeking street names and landmarks to replace Mayfair, Park Lane and Old Kent Road.

One of the playing pieces is an Indian sweet? Somehow I can’t picture demanding money from a gulab jamun. Then again I could never understand the purpose of the iron in regular Monopoly. After “Punjabi Boy” (the frequent Brit commenter on SM)plays this we’ll get a full report.

24 thoughts on “I want to be the three-wheeled scooter”