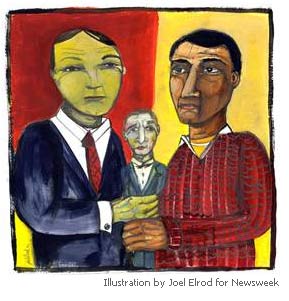 SM reader Laks Raghupathi sends us a link to an article in the May 30th European edition of Newsweek Magazine, titled The Big Squeeze. In it we see a yellow man, ostensibly representing a Chinaman, and a brown guy with a small red dot on his forehead. The brown guy appears to be squeezing the balls of the poor white guy (a.k.a. white-collared worker), as if all Americans and Europeans losing jobs are white. The white guy also appears to be wearing a bow-tie (what IS it with bow-ties?).

15 years after U.S. and European multinationals started shipping large numbers of manufacturing jobs overseas, experts are saying that the “second wave” of offshoring is at handÂ—and it promises to be bigger and more disruptive to the U.S. and European job markets than the first. In the years ahead, sizable numbers of skilled, reasonably well-educated middle-income workers in service-sector jobs long considered safe from foreign tradeÂ—accounting, law, financial and risk management, health care and information technology, to name a fewÂ—could be facing layoffs or serious wage pressure as developing nations perform increasingly sophisticated offshore work. The shift portends a dramatic realignment of wealth over the next couple of generationsÂ—valued by the U.S. consultancy McKinsey Co. at “hundreds of billions of dollars.”

I went over to Joel Elrod’s website to see his other work (which is quite good) and couldn’t find anything with this sort of xenophobic tone, which leads me to believe that Newsweek must have specifically commissioned this type of thing from him.Raghupathi sent off the following email to Newsweek:

I was disappointed to see a racist cartoon in an otherwise balanced article (The Big Squeeze – appeared May 30 in the European edition) showing a presumably Indian guy (identified by a dot on his forehead) and a East Asian looking guy (presumably Chinese) strangling a Caucasian person. Your portrayal is akin to the blame game played by politicians both sides of the Atlantic. Instead, you should have shown those big corporations who are strangling citizens of their own countries. Half of U.S. bound Chinese exports are by American multinationals themselves and everyone knows the biggest of them all – Walmart. Similarly in India, some of the biggest outsourcers are IBM and GE. Indians and Chinese are just driven by the ‘invisible hand’ of the ‘market forces’ to earn their livelihood.

52 thoughts on “Squeezing “the white guy””