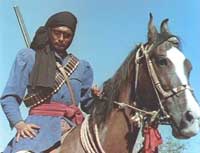 Bollywood legend Sunil Dutt died earlier today of a heart attack in Bombay. On June 6, he would have been 76.

Balraj Dutt was born in Khurd, Jhelum District (now Pakistan) in 1929. He worked as an announcer on Radio Ceylon before launching his film career. Success came quickly with Mother India in which he played the outlaw hero son of Nargis, who later became his wife. He also played a series of clean- cut modern youths in the late 50’s and was a talented comedian. He made his directorial debut in 1964 with Yaadein, an experimental one-man show, and was responsible for launching his son’s career in 1981 when he directed him in Rocky. Like his wife he entered politics, becoming an MP representing Congress (I) in North Bombay in 1979.

My earliest memory of a Bollywood film involved “Dutt Sahib” as Birju in 1957’s seminal Mother India; I will never forget the look on his face or the sound of his voice in the scene involving his long-suffering Mother’s (Nargis) bracelets. I remember my father telling me the following anecdote, much to my delight:

It is a well-known story that while shooting for the film, Nargis was trapped amidst lit haystacks. As the flames got higher and higher, Sunil Dutt playing her rebellious son, Birju, in the film ran through the fire and rescued her. He proposed to her and Nargis married Sunil Dutt and quit films after marriage. 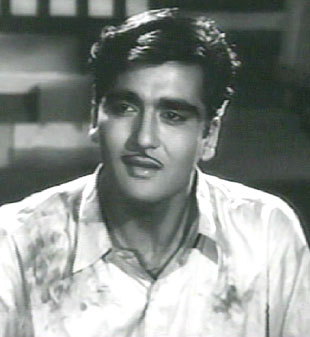 Dutt never forgot the hardship his family experienced during partition (a riveting tale in the Actor’s own words of how his Zamindar Uncle escaped with his life is here) and that past inspired acts of generosity that deserve to be recognised. During the 1962, 1965 and 1971 wars Dutt emulated Bob Hope’s USO activites and entertained Indian troops, on the advice of then Prime Minister Nehru. Dutt provided monetary support as well:

I did not dissolve myself only in films Â– I was very much aware of the problems within my country Â– because I had come through those problems too Â– the partition of India had virtually brought us on the footpath. I owe whatever I am today, to the people of my country. I became popular because of them, because of their love for me. I wanted to do something in return for their love. I had been in the film industry barely seven years when war broke out with China in 1962. I signed up a few films and gave the amount to Pandit Nehru Â– for our brave soldiers fighting under challenging conditions.

Though successful as a producer and director–he launched his son Sanjay Dutt’s career in 1981’s Rocky— Dutt turned away from celluloid when he lost his beloved wife that same year.

Nargis died of cancer, leaving Dutt devastated. He turned pensively away from films to the cause of social work and politics. He set up the Nargis Dutt Foundation for the cure of cancer patients. He has brought medical equipment worth three million dollars into various hospitals of the country. He helped raise 1-lac pounds for the Imran KhanÂ’s cancer charity fund and three million shillings for a cancer Hospital in Kenya.

He won his Mumbai seat five times in a row and will be remembered for working tirelessly for slum dwellers there.

Dutt is survived by his son Sanjay, as well as two daughters.