The Christian Science Monitor takes an inspiring look at the state of literacy in Kerala. Why are our Mallu friends so damn into their books and education? 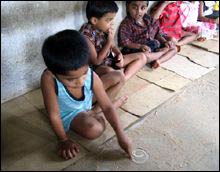 At the Janaranjini preschool in the state of Kerala in rural southern India, children aren’t building castles in the sand. Instead, as they sit cross-legged in front of a thin layer of sand, they are learning the fundamentals of reading and math.

Three-year old V. S. Madhav twirls letters of his native Malayalam - the language of Kerala – into the sand with his left forefinger while his classmate, 4-year old Neethu Saji, writes Arabic numerals more quickly than her teacher can call them out.

“I also learned like this. My father also like this,” says N. Revindhran. Mr. Revindhran is a volunteer at the public library that runs this preschool, locally referred to as a kalari. “This is the ancient model [of schooling],” Revindhran explains.

Education in Kerala represents a success story that many nations might wish to emulate.

I had always learned that the high literacy rate in Kerala was directly related to the emphasis that Christian missionaries there had placed on reading. The messages of the Bible are best spread by reading of course. This article cured me of some of my misconceptions.

In Kerala, commitment to education pervades society. About 37 percent of the state’s annual budget goes to education. The state supports 12,271 schools. There’s an elementary school within two miles of every settlement.

Even when times are tough, education is the last item the Kerala government will cut. “Traditionally, we’ve always been funding education. The social demand is there. If we make budget cuts now, there’ll be agitation from the people,” says A. Ajith Kumar, director of public instruction in Trivandrum, the capital of Kerala.

The roots of Kerala’s literacy culture can be traced back at least to the Hindu rulers of the 19th century. The Queen of Trivandrum issued a royal decree in 1817 that said, “The state should defray the entire cost of the education of its people in order that there might be no backwardness in the spread of enlightenment.” She hoped education would make her people “better subjects and public servants.”

Education is the “last item to be cut.” That is sick! Who do these people think they are? Just go type in “education cuts” at Yahoo News and see what turns up.

Despite Kerala’s education successes, the region has not yet been able to provide its literate population with enough work. Kerala has a rural employment rate of 11.6 percent and an urban employment rate of 12.2 percent, according to an economic review published by the Kerala government in 2003.

“Ninety percent of the people go out of Kerala to find jobs,” says K. Deepa, a computer-science teacher at a college in the town of Muvattupuzha.

But education allows many from Kerala to find work elsewhere – in other Indian states, the Middle East, and the US. The money they send back home forms the backbone of Kerala’s economy. Literacy has become the state’s chief asset.

And there you have it. A cynic would say that Kerala should spend less money on education and more money on business development by reallocating its education budget. Isn’t that what economically liberal countries end up doing? Maybe then Kerala would have jobs for its people. If this cynical view is true (and I hope it isn’t), then its kind of sad (but perhaps necessary) to think that quality of education, and the creation of the job market in which you apply that education, play against each other.

27 thoughts on “A royal decree from The Queen of Trivandrum”