You might not know this, but it is illegal to be gay in India.

While “there is no explicit mention of homosexuality or homophilia in any of the statute books,” in practice Section 377 of the colonial era Indian Penal Code (written in 1860) effectively criminalizes homosexuality by criminalizing gay sex. The Indian government stands by this law, saying

Indian society, by and large, disapproves of homosexuality and justifies it being treated as a criminal offence even when adults indulge in private [BBC]

A recent effort by activist groups to have the law reframed to legalize sex between consenting adults (the law also bans pedophelia and bestiality) failed on technical grounds, with the Delhi High Court saying that third parties have no right to bring such challenges. The Indian Supreme Court is now looking into the matter, but it is unclear what will happen next.

Even though being a lesbian isn’t criminalized by Section 377 (“unnatural acts” are defined by penetration and it is claimed that “Queen Victoria refused to include the lesbianism clause in the law because she could not imagine ‘such a thing existed’“), as with most things desi, it’s still harder to be a woman than a man:

In a largely patriarchal society, lesbians bear the brunt of social ostracisation and the law more than gay men. In many states, lesbians have taken their lives after facing harassment at home and outside.[Many women] …  have been forcibly married off by their parents. When they tell the truth, they are thrown out of their homes by their spouses, parents and relatives.  [BBC]

In one case, the father of a 31 year old teacher kicked her all the way down from the third floor when he learnt of her sexual preference [cite] 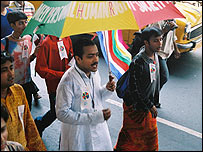 Recent years have seen a flowering of GBLT support groups. There are Lesbian support groups like Sappho in Calcutta and OLAVA in Pune and the Aanchal Trust in Bombay; “the eastern West Bengal state alone has some nine gay and lesbian support groups.” One of the Bengali groups claims to have reached out to 5,000 gay men in the 3 years it has been open. There is even a gay pride march in Calcutta. It drew 100 marchers in 2003 and 300 in 2004. But even in big liberal cities, activists say there is alot of homophobia, and alot of work to be done.

Further reading:  Fear and loathing in gay India, the first in a series of articles about Gay life in South Asia on the BBC website.