Air India has started international flights to Amritsar from Toronto and Birmingham on a new Delhi-Amritsar-Birmingham-Toronto route. Given that 50% of the passengers flying through Delhi’s airport are Punjabis, this should be an improvement in service for those passengers and help boost tourism as well. 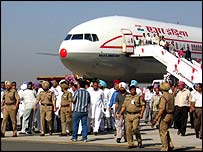 The flights will be operated with state-of-the-art, fly-by-wire Boeing 777-222 ER aircraft on Wednesdays, Fridays and Sundays. [webindia]

Sunday’s inaugural flight was flagged off by the federal civil aviation minister, Praful Patel, and Punjab’s chief minister, Capt Amarinder Singh. To handle the increased air traffic, the airport at Amritsar is being given a $15m makeover which includes a new terminal building and modern landing aids. [BBC]

This is just the first step. These flights will be upgraded to daily in the upcoming months and additional flights from Amritsar to the Gulf and other western countries are planned.

Air India isn’t the only airline increasing its flights through Rajasansi Airport; everybody wants a piece of the NRI action. In 8 years, the number of flights has increased from 3 to 56 per week:

Singapore Airline, which landed here four months ago, has been going full–three days a week. And with a new terminal likely to open in October, British Airways, Malaysia Airlines, Phuket Airlines, Tajikistan Airlines, Uzbek Airways and Air-India are also lining up a landing here, say officials.

Even cargo flights, such as those of Ariana to Kabul, are planning to double their flights from three to six in a week, while First Flight, a courier service, has evinced interest in starting operations, say officials. [Indian Express]

Interestingly, this new Air India route is a cousin of an older cold-war era Mumbai-Delhi-Amritsar-Moscow-Birmingham route from two decades ago:

If you want tickets on the new route, you might want to move fast. The first ten flights have already sold out and subsequent flights are already heavily booked.

9 thoughts on “The Flying Sikh”