Quick, who caught my song reference in the title? Niraj forwards us this article from the BBC about Pakistan’s recruitment of female fighter pilots. So hot. 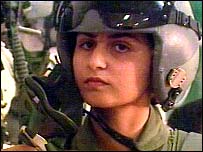 The Pakistan Air Force (PAF) academy has been all-male for more than 55 years – but now it is going through major change.

Women are now allowed to enrol on its aerospace engineering and fighter pilot programmes and are doing rather well.

To the great surprise of many men, some of the female recruits will soon start flying jet-engine planes.

Male cadets are having to come to terms with the fact that masculinity itself is no longer a condition for reaching this prestigious institute.

But can women withstand the forces that maneuvering a fighter plane puts on one’s body, and perform as well as men? Of course. We KNOW they can from years of experience but it is insightful to point to the data.

Extended periods of hard labour and limited caloric intake are common military conditions. Maximum normal acceleration forces during combat have increased from peak averages of 5 g to 9 g. Besides physical strength, air combat manoeuvring requires significant g-tolerance. G tolerances of 102 women and 139 men were subjected to a Standard Medical Evaluation and the G Profiles were compared. Unpaired t-tests revealed that there was no significant difference between the women and men in either relaxed or straining G tolerance. Covariance analysis controlling for differences in tolerance due to age, height, weight, and activity status revealed that the women have marginally lower tolerance; the analysis also identified height as a factor having a strong negative influence on G tolerance, and weight as having a positive influence. When the women were matched only by height to the men in the comparison group, the women’s mean G tolerances were significantly lower than the men’s. On Standard Training G Profiles, 88% of 24 women and 80% of 213 men completed the runs, but this difference was not significant. G tolerances of 47 women were measured on the Medeval Profiles both during and between menses, but no significant differences related to menstruation were found

Basically this means that the best fighter pilots are short and stocky with a lot of muscle, because this body type tends not to pass out as easily when the blood get sucked from the brain. You want to minimize the distance between the heart and the brain. Without the benefit of a G-suit I’ve even become light headed even at 2.5-3 Gs.

Until recently, most women in this conservative Muslim society would more likely have imagined marrying a dashing fighter pilot than being encouraged to become one.

But this was not true for Saba Khan, one of four female cadets to make it through the gruelling first stages of training.

“I always wanted to be a fighter pilot, and eventually with Allah’s wish and the full support of my parents, I made it this far,” she said.

And Saba believes the first batch of women could provide much-needed inspiration for many other girls, who may follow suit.

Beaming with excitement, another aviation cadet, Ambreen Gill, said it was impossible for her to explain how she felt when she flew a propeller plane.

It’s telling that the only way to describe how a first flight feels is to declare it “impossible to explain.” More things should be like that. What about India? Does the IAF allow female fighter pilots? I can’t say for sure but I could not find mention of that career path on the IAF website. In the interest of detente, and one-upsmanship I wouldn’t be surprised if that soon changes.

Also, as long as we are on the topic of bad-ass South Asian pilots, I’d be remiss if I didn’t point out that NASA has one Indian Astronaut left in its corps after Kalpana Chawla passed away. Sunita Williams is a former Navy helicopter pilot:

Williams received her commission as an Ensign in the United States Navy from the United States Naval Academy in May 1987. After a six-month temporary assignment at the Naval Coastal System Command, she received her designation as a Basic Diving Officer and then reported to Naval Aviation Training Command. She was designated a Naval Aviator in July 1989. She then reported to Helicopter Combat Support Squadron 3 for initial H46, Seaknight, training. Upon completion of this training, she was assigned to Helicopter Combat Support Squadron 8 in Norfolk, Virginia, and made overseas deployments to the Mediterranean, Red Sea and the Persian Gulf in support of Desert Shield and Operation Provide Comfort. In September 1992 she was the Officer-in-Charge of an H-46 detachment sent to Miami, Florida for Hurricane Andrew Relief Operations onboard USS Sylvania. Williams was selected for United States Naval Test Pilot School and began the course in January 1993. After graduation in December 1993, she was assigned to the Rotary Wing Aircraft Test Directorate as an H-46 Project Officer, and V-22 Chase Pilot in the T-2. While there she was also assigned as the squadron Safety Officer and flew test flights in the SH-60B/F, UH-1, AH-1W, SH-2, VH-3, H-46, CH-53 and the H-57. In December 1995, she went back to the Naval Test Pilot School as an Instructor in the Rotary Wing Department and the schoolÂ’s Safety Officer. There she flew the UH-60, OH-6 and the OH-58. From there she was assigned to the USS Saipan (LHA-2), Norfolk, Virginia, as the Aircraft Handler and the Assistant Air Boss. Williams was deployed onboard USS Saipan when she was selected for the astronaut program. She has logged over 2300 flight hours in more than 30 different aircraft.

30 thoughts on “The further on the edge, The hotter the intensity”