My cruel friends like to tease me. They tell me that by the time I become an astronaut they will be able to buy the ticket for the seat next to me. Bastards. They might be right. Space tourism, though still in its infancy, is full of possibilities. Now and Indian-American entrepreneur from Chicago is trying to get in on the action. From the Hindustan Times: 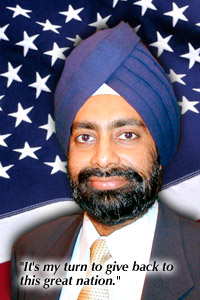 Kathuria, who some years ago, co-founded MirCorps, a Russian partnered company that sent American businessman Dennis Tito to space April 4, 2000, is partnering with Canadian Arrow to form a new Canadian corporation called PlanetSpace.

“We are interested in making this a profitable business. I am more interested in getting applause form Wall Street rather than from jet propulsion labs,” said Kathuria who could not become an astronaut as a teenager because he wore glasses.

“The fact is I’ve always wanted to make commercial space travel a reality for the everyday person, and to create a business to make a company profitable.

Apparently I’m not the only one who dreams of space AND politics though. Kathuria is quite ambitious. Googling him led me here. On April 15th Kathuria announced his bid for Lieutenant Governor of Illinois (in 2006).

I am here today to invite you to understand who I am, what I stand for and why I feel I am a good candidate.

Why should a conservative vote for me? Because I believe in, and have benefited from the Conservative agenda. Free markets helped me create my businesses, tax relief put money in my pocket, Homeland Security kept me safe from terrorist attacks, and I strongly believe in the family values that have been instrumental in my personal and professional life.

What is America? America is a country that would allow a man as distinguished looking as myself to rise and become a leader because of my dedication and education.

It is natural that my appearance has invoked curiosity. DonÂ’t let this turban and beard fool you. I am an American first and foremost. I was brought from India when I was eight months old, and I was raised in this tolerant and accepting country. I was raised to believe in the American Dream, and with hard work and diligence I managed to live the American Dream. My parents came to this country with a few dollars. Their son graduated from Downers Grove North High School 20 years ago and had the privilege of earning undergraduate and medical degrees from Brown, and an MBA from Stanford and now owns several business ventures ranging from medical to technological to space exploration that have generated a considerable amount of shareholder wealth and jobs. However, any success that I have achieved I owe to the opportunities and freedoms that America has given me. Now itÂ’s my turn to give back to this nation that has endowed me with enormous personal growth. Because of my background, the issue of technology will be a major plank in my campaign platform.

I’m telling you guys. Illinois LOVES politicians with foreign names. This guy may have a shot. Our Republican friend’s issue page can be found here. He IS conservative alright.

Will the taste of politics corrupt the innocent lure of space, or can they mutually co-exist? I am waiting eagerly to find out as Kathuria explores new frontiers.

14 thoughts on “Space and Politics”