A new biography argues that the British commander who ordered the Jallianwala Bagh massacre on Vaisakhi day, 1919, was every bit as sadistic as reputed. Nigel Colletts’ damning take on General Reginald Dyer is rightly called The Butcher of Amritsar (via Amardeep Singh):

… Indians… were also incensed by the General’s notorious “crawling order.” In the street where a female missionary had been left for dead, Dyer decreed that between 6am and 8pm Indians could only proceed on their bellies and elbows and were to be beaten if they raised a buttock… a series of outrages… ensured that the indigenous elite would seek fulfilment in a government of their own race… [the book] helps retire the notion that the end of the Raj was anything but a good thing. 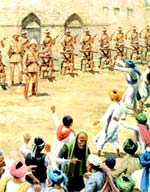 Surprisingly, Dyer’s instruments of butchery were desi soldiers from remote areas, not Brits. (The U.S. has pursued a similar strategy by using Kurdish soldiers in Sunni areas in Iraq). You’ve got to wonder what the hell Dyer’s soldiers were thinking as they methodically murdered their countrymen with manual rifles:

He chose from the troops at his disposal those he thought would harbour the least compunctions in shooting unarmed Punjabi civilians: the Nepalese Gurkhas and the Baluch from the fringes of far-off Sind… His “horrible, bloody duty”, as he called it, consisted of ordering his soldiers to open fire without warning on a peaceful crowd in an enclosed public square. The General directed proceedings from the front, pointing out targets his troops had missed, and they kept shooting until they had only enough ammunition left to defend themselves on their way back to base. While Dyer made his escape, a curfew ensured that the wounded were left to linger until the following morning without treatment… nearly 400 had been killed, including 41 children and a six-week-old baby, and around 1,000 injured.

Dyer, who was born in what is now Pakistan, was a stim-seeker and risk-taker with a strangely bipolar moral makeup:

… [Dyer] resigned from his officers’ club when it refused to end racial segregation. However… the Inspector of Infantry in India, described him as “an excitable lunatic” who did little during his time as a garrison commander except that “he used to drive about the mountain roads around Abbottabad with a car full of ladies of the station, his great delight being to frighten them by dangerous driving at which he was an expert. The man was insane.”

He was also prone to sociopathic callousness:

Of the fate of the injured, who had lain 10 deep in places, he remarked “the hospitals were open… The wounded only had to apply for help.” Dyer – and many of his contemporaries – believed that he had nipped a second Indian Mutiny in the bud…

Although Winston Churchill denounced Dyer’s murderousness, the British Parliament at the time anointed him a hero. Twenty-one years later, Udham Singh assassinated the former Punjab governor in London with two rounds from a Smith & Wesson .45. He claimed revenge for the Amritsar massacre and was hanged within four months.