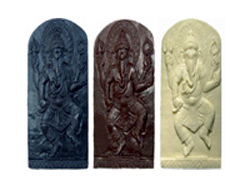 New California Media reports on a story found in India West Magazine about chocolate Hindu deities. As I will explain in a moment this is met (by me at least) with great relief and gratitude:

Chocolate Deities, a confectioner based in the Catskill Mountains of New York, offers handmade chocolates molded into the shape of Lord Krishna, Ganesha, Buddha, the Tibetan goddess Tara and many other gods and goddesses.

Some customers like to eat them, while others, according to company cofounder Jeanne Fleming, prefer to put the chocolates on their home altars or even melt them down for hot chocolate or sauces.

“In the case of [Krishna and Ganesh], Hindus asked me to make them … and many of the folks who buy them are Hindus,” she wrote in an email to India-West Mar. 25.

Well hell. I will buy them for sure. So far there hasn’t been a good way for chocolate worshippers like myself to properly practice our faith. As you can see by the picture of my makeshift shrine at home, there is much left to be desired. This way at least my mother will believe that I have returned to my roots and am worshipping Hindu Gods again instead of practicing my heretical Swiss beliefs. 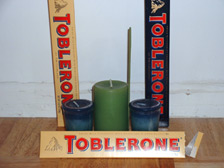 “We are not expecting that all those who buy our chocolates will necessarily eat them,” Fleming told India-West. “If you read our website carefully, we suggest that they can be used in ceremonial ways, as ritual objects, or spiritual objects for the kitchen. They are not like bikinis, or lunch boxes, or beer labels. They are not used ‘for’ something else, or in the service of something else. They are themselves what they are: objects of devotion, offerings, art, or to be eaten.”

Chocolate Deities website is actually very educational. They even explain that Ganesha liked sweets (so he’d probably approve of this venture):

Ganesha was very fond of sweets. There was one that he particularly adored, a dumpling called a modaka, which has steamed wrapping made of rice flour and a filling that absolutely bursts with coconut and dried fruit. Whenever Ganesha saw a dish of modakas, he had to stop and eat one. Of course, once he had eaten one, he had to eat another. Then another, and another until the dish, in no time at all, was empty.

5 thoughts on “The Gods of Chocolate”