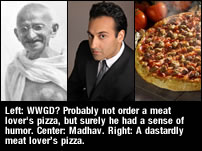 Actor Sanjay Madhav recently auditioned for a part in a comedy festival promo, and was so offended by the sketch, that he shared his experience on Hollywood Masala’s message boards.

The spot entailed Mohandas Gandhi (not the part that he auditioned for) playing a prank on his followers by ordering a meat-lovers pizza. From Madhav’s original post:

I do have a sense of humor about these scenarios, however this is offensive to many, including myself. When will the non-Indian population realize that Gandhi is to many Indians, what Martin Luther King is to the African-American people. Would they dare make such a mockery of Martin Luther King without public backlash? I think we know the answer to that question.

Wait, I have a different question: What brand of pizza did he order? Since I haven’t seen the promo, it would be inappropriate for me to weigh in on Madhav’s specific complaint. However, it would definitely piss me off if Gandhi was depicted ordering some cheap, craptastic, fast food pizza. I’d like to think that if Gandhi was going to buy pizza for his followers, he would spring for something good like California Pizza Kitchen or Round Table. He was the father of an entire subcontinent — give the man some respect and portray him ordering a slab of the top shelf pie.