While we’re freeing Jins from diyas, definitely check out the desh-hop artists who own3d the mike in the hip-hop documentary Brown Like Dat.

First, MC Kabir. The son of Nobel winner Amartya Sen, Kabir is half Italian and lives in Boston. He’s got good flow, an apropos namesake and a solid track in ‘Recognize.’ Kabir tells a great story on screen about freestyling in a dark club and pushing off an overzealous fan who was trying to grab the mike. ‘When I looked closer, I realized it was Wyclef.’ And they jammed. It’s hard to tell the story while looking humble; his lips twitched, but he had it sorted. Listen here. 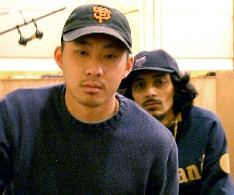 Also give a listen to the Himalayan Project. Chee Malabar, who showed up to the screening, sported a gaunt frenchie and a serious ‘fro, looking for all the world like a brown Dogg.

The group’s name pays homage to their ancestral roots in India and China — the Himalayan mountain range straddles the borders of both countries. [Official site]