Aishwarya’s crossover plan is running on IST: old-time starlet Ava Gardner, who’s currently being impersonated in The Aviator, crossed over way back in the ’50s. Gardner starred in Bhowani Junction, a 1956 film about an Anglo-Indian struggling with identity in post-Partition India.

I haven’t seen it, so I’ve got no idea whether it was more respectful than Gunga Din and its ilk. The character does try ‘going native,’ and she does wear brownface, though it seems subtle. Money quote: ’I thought I could overcome my guilt by becoming a Sikh!’ Reel Movie Critic has the plot summary:

Ava Gardner delivers a stellar performance of a ravishing nurse in the English army in India in 1947… She initially is romantically involved with another “chi-chi” (half-breed)… She is the victim of an attempted rape by her brutal co-worker, Lt. McDaniel (Lionel Jeffries), which sends her into the safe and strict arms of a traditional Indian, Ranjit [Singh] Kasel (Francis Mathews).  Draped in a sari, she makes bold political/racial statements by showing up at various military events dressed in traditional Indian attire. But she seems to appear to her British colleagues to be trying too hard to claim her new ethnic identity… Ultimately she has a romance with a stoic, brave Anglo-Saxon British Officer… she realistically declines to return with him as his wife to live in England, certain she will be treated like a half-breed outsider in that society. 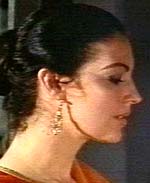 Chowk fills in the backstory:

… it is quite similar in theme to Deepa Mehta’s ‘Earth 1947′ which also deals with Partition through the eyes of a Parsi girl, another outsider to Indian society… Fifty years on, people still talk about when Ava Gardner came to Lahore to film this movie. I think every man of the previous generation fell in love with her then… it says a lot about an actor or actress who is willing to take on a complex role in a different culture – like Christopher Lee who took on Jinnah back in 1997.

One of the cinephile sites observes that there have been two big waves of Western commercial films about India, one set off by 1947 and the other by Gandhi envy.

A Ph.D. student with Anglo-Indian roots complains the film doesn’t get enough respect for being one of the few films from that perspective (so Merle Oberon, Freddie Mercury, The Impressionist and Jimi Mistry don’t suffice?):

… few of the novels concerning the Raj invoke, or even acknowledge, the unique role and perspective of the Anglo-Indian Community, an ethnically and culturally hybrid people of mixed European and Indian ancestry known also, at various times, as “Eurasians,” “half-castes,” “half-breeds,” “blacky-whites,” “eight-annas” and “chee-chees.” Anglo-Indians today remain a numerically small minority both diasporically and within India… they are socially marginal to the British, and both socially and culturally marginal to the major Indian communities…

She credits Anglo-Indians with running large swaths of colonial bureaucracy:

… working on the railways was not only the quintessential Anglo-Indian occupation but also one of the few sources of unabashed Anglo-Indian pride… many of the accomplishments cited by the British as evidence of their innate “superiority” as “whites” were in fact undertaken by men and women who were “not quite white.”