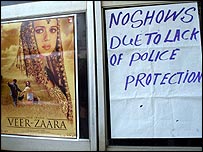 In glossy, hi-tech Bangalore, India’s virtual bridge to the west, decidedly parochial sentiments are aflame. Kannada groups, concerned about the influx of Tamilians, are taking a hard line stand against films made in outsider languages. This includes movies in English or Hindi, India’s two official languages. As a result, Veer-Zara, Bollywood’s current megahit, cannot be shown.

Policemen are frisking ticket holders at the gates as a security measure in the wake of threats to disrupt the first screenings of the film in the city. The film has been screened in defiance of an unofficial moratorium … on new films not made in Kannada, the language of Karnataka state. Police are taking no chances as the threat is real. [BBC]

END_OF_DOCUMENT_TOKEN_TO_BE_REPLACED

Why don’t you EVER hear that? British accents are sexy but Indian ones for some reason aren’t. Humorist Melvin Durai writes a coulmn over at Indolink.com lamenting this unfairness:

The other day, my wife, a research scientist, returned home with a major finding, one that may soon be published in a scientific journal. “The Irish accent,” she announced, “has to be the sexiest in the world!” She had been listening to National Public Radio in her car and some Irishman had gotten her a little, shall we say, revved up. SheÅ½d been totally charmed, even without seeing his face, smelling his cologne, or exploring his views on politics, literature and the theory of evolution.

Needless to say, I was envious. IÅ½ve always wanted to have that kind of effect on women. Just open my mouth and have them falling at my feet, begging me to say more. But as luck would have it, only one woman has ever fallen at my feet after I opened my mouth — and she was begging me to try a breath mint.

IÅ½ve tried enchanting women with an accent, but the only accents that come naturally to me, the only accents I can pull off, havenÅ½t endeared me to a single woman, even when IÅ½ve gone so far as to say, “Vat a lowely voman you are!”

If I were Irish, IÅ½d be sweeping women off their feet every chance I got: “Whart a lurvely worman ya arre!” Of course, IÅ½d save my best line for my wife: “Whart a sirksee marn ya mahreed!”

Melvin has an idea though of how to get mainstream America to grow to love the Indian accent.

… the Indian accent may not seem particularly sexy, but wait until NBC produces a reality show called “The Programmer.” Ten Indian computer experts compete for the chance to get a job at Microsoft, joining ten zillion others. Soon every woman would find her heart palpitating whenever she hears the words “softvare enjunyer.”

END_OF_DOCUMENT_TOKEN_TO_BE_REPLACED

Ummm. I don’t really know how to explain this one so I am not going to even try. You gotta believe that there is a market for this. Right?

DESIGNERS of an Indian high tech crematorium have decided to screen funerals online so that people who can’t make the ceremony can watch it from the comfort of their own home.

The website will be called www.mokshadham.org [note: website is probably .com and not .org, and it isn't up yet] which in Sanskrit means “abode of liberation”. Most Hindus believe that cremation brings liberation, mukti or moksha. Hence, the site where relatives are burnt is called a samadhi. Holy men, sadhus, may become liberated while they are still alive and so are buried, not burnt. Because of these considerations, Hindus rejoice at death and only the faithless mourn.

The site is expected to be live by June.

The NYT reviews Magic Seeds, V.S. Naipaul’s sequel to Half a Life. Naipaul’s protagonist Willie Chandran join a pointless communist group in India, a metaphor for the reign of Marxists in the author’s native Caribbean:

Willie is the latest exemplar of a type familiar to Naipaul’s readers: the fanatical idealist drawn to… “socialist mimicry.” Cheddi B. Jagan, the orthodox Marxist who rose to become prime minister of Guyana; Michael X, the black power leader who ends up a murderer in Trinidad… Naipaul is infuriated by their charade, the fraudulent progressive ideology that masks their will to power.

Chandran is eventually disabused of his fuzzy-minded notions. Naipaul also mocks hopes for a postracial society, and not gently:

Willie attends the wedding of the half-English son of Marcus, a West African diplomat “who lived for interracial sex, and wanted to have a white grandchild.” The groom, Lyndhurst (“very English,” Roger comments dryly), is marrying a white woman, a union that will result in the culmination of Marcus’s dream. The wedding takes place at a grand house fallen into dereliction in the English countryside. A passage from Othello is read, an “Aruba-Curacao” band plays…. just as the mixed-race couple is about to exchange vows, one of the children they’ve had out of wedlock audibly passes gas, no one is certain which: “But the guests lined up [with political correctness] on this matter: the dark people thought the dark child” had done it; “the fair people thought it was the fair child.”

END_OF_DOCUMENT_TOKEN_TO_BE_REPLACED

This post is in honor of the busiest shopping day of the year. A fashion entrepreneur might do very well with a more desi-friendly Zara:

The Economist compliments its speed:

Zara is the world’s fastest-growing retailer… Zara can make a new line from start to finish in three weeks, against an industry average of nine months. It produces 10,000 new designs each year; none stays in the stores for over a month…

Someone please clone this store, quick. The number of dark-haired people in the U.S. (black, Latino, Asian, desi) is enormous and growing. Zara with a more desi-friendly line and deeper supply chain could be an absolute gold mine…

The family of a late Himachal Pradeshi princess is not happy with her beneficence to her domestic help:

Raj Rajeshwari, 66, princess of Bilaspur in India’s Himachal Pradesh state, reportedly changed her will shortly before she died. She left about 25m rupees ($556,000) to a peanut-selling father and son who also worked as her domestic helpers.

“…cash, gems and jewellery, a car, Persian carpets and rare artefacts have been left to Babloo Gupta and Ram Bilas. The remaining half of the property has been handed over to a trust of the Himachal Pradesh government to open an old people’s home.”… The princess’ brother is furious, accusing the beneficiaries of drugging her to change the will…

The reclusive, unmarried princess changed her will the day before she died. Is there substance to her family’s claim? Her sister-in-law says:

“They attempted to kill her by an overdose of alprex (sleeping pills) three years ago and have indulged in foul play again.”

CSI:HP is on the case. Results are due back Wednesday at 8/7 Central.

I thought since its Thanksgiving why not do a small survey of what is being eaten in Desi kitchens. Growing up in my house we usually ate traditional Lasangna or some equally rebellious dish. I have always been a bit of a Grinch when it comes to the holidays so I don’t care about corporate America’s traditions. From the Portsmouth Herald:

Turkey Tandoori, anyone? Well, not exactly, but Gill Varinder, manager of Shalimar Restaurant, said that some of his native India makes it to his Thanksgiving meal.

“We do celebrate Thanksgiving. All the Indians here have for a long time. Mostly they will cook the turkey like everyone else does, but the stuffing is different. Ninety percent of the time, the stuffing is made with spinach and green peas.”

Varinder said that, while a turkey can be cooked in a traditional Tandoori oven, it would take a very long time, and on the Indian table garlic is a big ingredient for the turkey.

“We slice the skin and put garlic under it. Our gravy is a bit different, too. We take about 5 pounds of fresh lamb and cook it with onions, ginger, garlic, cumin and tumeric, and cook it down for three or four hours until itÂ’s very thick and dark brown.”

What else is different and whatÂ’s the same on the Indian table?

“We donÂ’t have much pie, but the side dishes are usually the same as the regular dinner. We have mashed potatoes but also some rice and chapatti (whole-wheat flat bread). And we drink scotch.”

Mashed potatoes and scotch. Some things on the Thanksgiving table transcend cultures.

END_OF_DOCUMENT_TOKEN_TO_BE_REPLACED

I just finished watching tonight’s episode of the West Wing on NBC. Maybe it is John Wells (the producer of ER and The West Wing), or maybe NBC has simply discovered the Desi market in the U.S., b/c this episode of The West Wing featured who I thought was Pragna Desai (she starred in ER’s episodes based in the Congo and The Ben Affleck flop The Sum of All Fears) as Leo McGarry’s nurse.

In the episode, Leo has lost his appetite, and Desai, as his nurse–ok, so we still only play health care professionals (but it is a start!)–uses Indian food and her good looks to charm McGarry into eating.

Is a South Asian woman, dressed in her wedding best and bearing Indian food better than certain illicit substances at giving people the munchies?

Also interesting was some of the dialogue between Desai and McGarry. In the episode, McGarry was considering joining the board of some sort of corporate chemical company. The company seemed quite similar to Union Carbide, because at one point McGarry asked Desai if she was from Haryana, and that that the company was trying to make up for all of the damage it had done there in 1986. Perhaps this was a reference to the Union Carbide disaster in Bhopal in 1984, and the upcoming 20th anniversary of this tragedy on December 3. The issue of a name-change was also discussed, a la Union Carbide to Dow Chemicals.

What is up with alluring South Asian men lately? Apparently, famous women can’t resist them!

We could spend the whole column this week trying to untangle the web of intrigue surrounding Imran Khan, Goldie Hawn, Kurt Russell, Jemima Khan, her children and Hugh Grant.

…The story so far has the sprightly sexagenarian Goldie doing a runner from California to be at Imran’s side at a get-together in India, where “friends” say they were very pleased to see each other. New Idea tells us Goldie has become obsessed with Imran since meeting him two months ago. One witness was “amazed” at the display of affection.