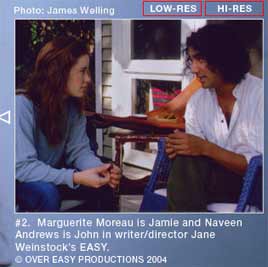 Naveen Andrews who plays an ex-Iraqi Republican Guard soldier on ABC’s Lost, will be co-starring in an upcoming movie titled Easy (as in Sex is, but Love isn’t). From the movie’s website:

Lately, lighthearted stories about single urban chicks looking for love in a world of noncommittal guys flood our newsstands, televisions, and Cineplex screens. EASY confidently rises above the ranks of these romantic comedies, offering a less glossy, more penetrating vision of lovelorn life. Jamie Harris, portrayed with sparkling intelligence by actress Marguerite Moreau, is a neurotic, bright 25-year-old with a career naming peculiar consumer products. Though she gives them their identities, she’s rather confused about her own. After dating a string of jerks, she’s bewildered about whom to trust or how to find true intimacy. When two seemingly honorable men orbit around her, Jamie must confront what she is most afraid of. As in Shakespearean comedies, writer/director Jane Weinstock’s playful, nuanced script adroitly tosses competing desires up in the air, offering audiences the delicious pleasure of watching characters squirm and wriggle before everything falls into place.

…The Production Designer was Aradhana Seth (“The Guru”)

After viewing the clips it looks like the movie has some potential. But then again I am a sucker for movies about angst ridden urban chicks.

The full trailer can be seen here.

5 thoughts on “Naveen Andrews is Easy”