The NYT on desis in Trinidad: 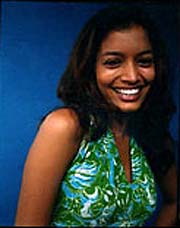 When slavery was abolished on the island in the 1830′s, the planters looked to India for workers, and the first ship, bearing more than 200 Indian indentured servants, arrived in May 1845. Over the next 75 years, some 143,000 Indians came to Trinidad, mostly from Calcutta, and mostly Hindu.

On one man’s struggles in the name of religion:

The Waterloo Temple was first built near the coast in 1947 by a devout laborer named Seedas Sadhu. Problem was, he didn’t own the land, so the bulldozers rolled in to level his creation. Undaunted, he commenced a 25-year project of hauling rocks and concrete several dozen yards offshore at low tide; there he single-mindedly set about constructing his own island where a new temple could stand unmolested… the Trinidad government commissioned a more permanent artificial island, connecting it to the mainland by a pedestrian causeway.

Seeda-sadhu is an ideal name for a priest. But since his artificial island was constantly eroding, maybe it should’ve been Sisyphus. Another devotee built a supersized statue of the monkey-king to rival the Bamiyan Buddhas: 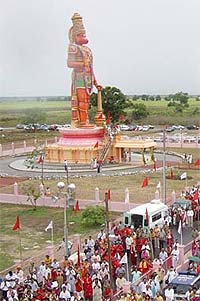 … the Hanuman murti, a striking statue of the Hindu monkey deity that towers about eight stories over the surrounding cane fields… it’s said to be the largest such statue outside India…

Everyone’s a critic, not least the least-favored scion V.S. Naipaul:

Trinidadians appear to regard him with a mixture of disguised reverence and open disdain… Naipaul has never been forgiven for eagerly abandoning the island for England… then making a career of dourly criticizing West Indian provincialism. When Naipaul had nothing nice to say, he evidently sat down at his typewriter and started pecking away.

7 thoughts on “Desis in Trinidad”