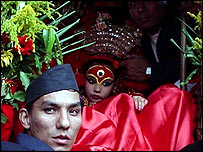 Every little girl is a goddess. Especially, if she’s Preeti Shakya, of Kathmandu.

“Preeti Shakya … [is] revered as the Kumari and incarnation of the Hindu mother goddess Durga. Each Kumari is chosen aged only three or four, always from the same Buddhist clan, and has to have 32 attributes, including thighs like those of a deer and a neck like a conch shell.”
“She lives a confined life, only coming out of her palace three or four times a year until she reaches puberty when another Kumari must be found.
This main outing coincides with a festival of thanks to the local rain god and as always, her feet must never touch the ground unless there is a red carpet beneath them. ”

Unfortunately for the Kumari, life isn’t all a bed of roses. She gives up her childhood for those around her, but when she returns to civilian life, it’s not easy:

Some former Kumaris have recently been speaking out about the difficulties of rejoining a family you hardly know.
One said it was a real shock being told what to do by teachers and difficult playing with other children.
Another, that she simply did not know how to face her freedom.

There’s so much I could say about this, but I think I will let it speak for itself and let you, dear readers, provide all the commentary you wish.