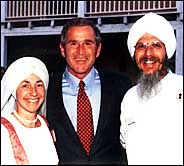 Remember how lots of Americans are suspicious of guys in turbans? Now we’re actually hiring Sikhs to tote firepower around U.S. Army bases. It plays in Peoria, though, because these American Sikhs are white:

In the straight-laced world of the security business, where most people have a police or military background, Akal stands out. It is the only security company that anyone in the business, including Akal’s own executives, can think of that is owned by a nonprofit religious organization. “If we are in a room with 50 other contractors, you won’t remember the other guy, but you will remember us,” said Mr. Khalsa, who wears a white turban, has a long beard and refrains from cutting his hair.

In all fairness, although the owners are turbaned Sikhs, the guards generally are not. American Sikhs are an enterprising group with a CEO from Harvard Business School (thanks, Ennis) and a consumer products empire pulling in $60M annually:

Of course, that entrepreneurial impetus often comes by way of rejection:

… Gurutej Khalsa found that although he had graduated from several law enforcement schools, his beard and turban prevented him from getting a job. He turned to Yogi Bhajan for advice and was told that if he started his own company, the police would begin to work for him.

Daniel became Daya, Arthur became Avtar, so how did they land federal contracts? They did it the old-fashioned way: generous campaign contributions, dragon seeds from which spring a phalanx of politicians to their defense. Proof that they’re true-blue Americans! It warms the cockles of my heart.