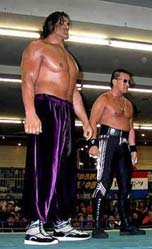 Wrestler Dalip ‘Giant’ Singh: a living testament to the effect of androgens on fetal development. 7’3″, 408 lbs, claims to eat five chickens and 24 eggs a day.

Wrestler Tiger Jeet Singh. Not so large, but like Hasselhoff, he’s big in Japan.

…running amok in a Japanese arena, bedecked in a turban and brandishing a menacing sword. Bellowing like a bull elephant in heat, he attacks members of the ticket-paying audience, scattering them hither and yon… He once mauled the editor of Tokyo’s largest sports daily newspaper. Another time, the Tiger demolished a Mercedes with a baseball bat in downtown Tokyo during rush hour… He claims that Japanese wrestling fans will not wash those parts of their body he has struck, so honored are they to be pummelled by Tiger Jeet Singh.

The jawans on the India-Pakistan border, from the always-funny Sin.

… the border guards are all MASSIVE. The midget amongst them was 6’8″ tall… the guards (quite literally) utter these primal screams at the other side of the border, in some sort of bizarre alpha-male routine. The whole macho element of guns, sabres, and massively magnificent moustaches is, however, completely ruined by the modern dance routine that ensues once the “parade” begins; although it defies description, lets just say that it involves high-kicks, stomping, twirling, a hip-shimmy, and much prancing.

END_OF_DOCUMENT_TOKEN_TO_BE_REPLACED

Small OpEd in the Econ Times – Desi Americans against outsourcings -

…recently, when the Chairman of the Indian-American Republican Council, criticised the Senate Democratic leader Senator, Tom Daschle for telling his constituents that six million jobs will be outsourced to India, R Vijayanagar said that these statements are nothing but cheap rhetoric. Claiming that yet another Democrat has used India as a scapegoat to score political points in a desperate attempt to win an election, he said the Indian-American community was affected by such Xenophobia. But are their fears genuine?

Well why not? We outsource everything else. It’s good for a free market economy. On September 20th I wrote about the deportation of a Sikh man who claimed he would be tortured if returned to India. You see, it is against international agreements for the U.S. to deport someone if they know that person will be subjected to torture. In the case of th Sikh man there was controversy as to whether or not his claims were false. Soon though, that argument may be irrelevant. From the Washington Post:

The Bush administration is supporting a provision in the House leadership’s intelligence reform bill that would allow U.S. authorities to deport certain foreigners to countries where they are likely to be tortured or abused, an action prohibited by the international laws against torture the United States signed 20 years ago.

The provision, part of the massive bill introduced Friday by House Speaker J. Dennis Hastert (R-Ill.), would apply to non-U.S. citizens who are suspected of having links to terrorist organizations but have not been tried on or convicted of any charges. Democrats tried to strike the provision in a daylong House Judiciary Committee meeting, but it survived on a party-line vote.

END_OF_DOCUMENT_TOKEN_TO_BE_REPLACED 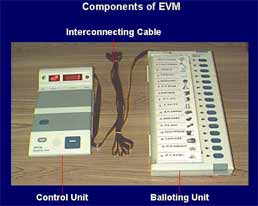 Slate magazine pokes fun at America’s continuing electronic voting anxiety by using India as an example of how to do things right:

While we in the United States agonize over touch screens and paper trails, India managed to quietly hold an all-electronic vote. In May, 380 million Indians cast their votes on more than 1 million machines. It was the world’s largest experiment in electronic voting to date and, while far from perfect, is widely considered a success. How can an impoverished nation like India, where cows roam the streets of the capital and most people’s idea of high-tech is a flush toilet, succeed where we have not?

Apparently India uses an incredibly simple technology that may not be as fancy as the machines here, but does the job well. END_OF_DOCUMENT_TOKEN_TO_BE_REPLACED

It is well known that there is a growing unease between black South Africans and Indians in South Africa. How bad is it? A recent poll suggests that are large percentage of Indians there think that things were better during apartheid. From Rediff.com:

Despite their support for the ruling African National Congress, more Indians than whites in South Africa were unhappy with the present dispensation and prefer the former apartheid regime to the present democratic state, a survey by ANC has revealed.

The survey, conducted in the Guateng region (which has an Indian population of over 3,00,000) revealed that 37 per cent of Indian respondents replied in the affirmative when asked whether they prefer going back to the apartheid regime compared to 19 per cent of whites who made the same choice.

There is of course a lot of racial tension between the two groups:

The [poll] has made the ANC deduce that the “skepticism” of the Indian and coloured communities towards the government was due to the perception that before they were “not white enough and now they are not black enough.”

I remember hearing about a racist song out of South Africa not so long ago (2002) that was very popular.

A new song [2002] by renowned South African composer and producer Mbongeni Ngema is causing a racial stir Â— this time round between blacks and Indians. The song, “Amandiya,” which means “Indians” in Zulu, has lyrics describing the country’s Indian population as abusive to black people, and being more racist than whites.

Ngema’s song blames Indians for taking advantage of blacks. He denounces the influx of immigrants from the Indian subcontinent, who he says are flooding into South Africa, so much so that “a brave man is required to confront” them.

The song struck a wrong musical note with the country’s leading politicians and human rights activists, who are wary that the song could provoke racial hatred in a country that prides itself on its new commitment to multiracial cooperation after years of apartheid rule. As of June 19, it was removed from the public airwaves until further notice.

END_OF_DOCUMENT_TOKEN_TO_BE_REPLACED

Scientists believe that the Indian curry leaf – an ingredient in many curry dishes and used in traditional Indian healing, may contain agents that slow down the rate of starch-to-glucose breakdown in people with diabetes. The tree’s leaves could control the amount of glucose entering the bloodstream. [link]

By comparing the protein fingerprints with gene expression databases, more than 100 previously unknown mitochondrial proteins were identified. He used a similar, coordinated approach to identify the gene that causes Leigh Syndrome French Canadian variant, a fatal metabolic disease.  In diseases resulting not from a single gene but the interaction of sets of genes, he introduced a computational method for identifying patterns of gene activity in specific diseases… As importantly, Mootha has pioneered powerful, adaptable computational strategies for mining data collected in laboratories throughout the world, providing an efficient means to hunt down gene interactions that lead to a wide variety of diseases.

The James Logan debate coach won one as well. The Fremont-Newark-Union City area across from San Francisco has desi and Afghan gang problems, so this guy’s in the thick of it.

For 15 years, against long odds, Tommie Lindsey has held together an award-winning speech and debate team at James Logan High School in the blue- collar suburb of Union City. His students frequently defeat well-heeled competitors from elite high schools.

His teams have won four state championships; three James Logan students have been top winners at the national level and 25 at the state level. This year the team has more than 200 students. Ninety percent of Lindsey’s students go on to four-year colleges. Overall at Logan, just one-third of students qualify for the state university systems… In recent years, the team has been featured in a documentary and won a $100,000 award from Oprah Winfrey.

A 200-person debate team is enormous.

Microsoft is offering a lower-priced version of Windows in Hindi to discourage piracy. But Microsoft has artificially hamstrung Windows XP Starter Edition in some funny ways:

… display resolution is capped at a maximum of 800 by 600 pixels… users can run only three programs or have three windows opened at once, a limitation that research company Gartner believes could frustrate users and drive them to buy bootleg copies of Windows XP instead.

Muslims are demanding four simultaneous windows, while Hindus are happy with just one. Tamils are protesting Hindi hegemony, and the BJP is angry over Windows-with-a-tiny-dikki and is pushing for a nuclear-powered version.

In all seriousness, differential pricing is as big an issue in software as it is with drug reimportation. Customers hate it, yet countries with lower average incomes can’t afford first-world prices. And high-value products that are easy to pirate are especially trapped in dilemma. To their advantage, software companies can create market-specific versions in ways that pharma companies morally cannot.

A life sized bronze statue of ‘Mahatma’ Gandhi will be unveiled and put on permanent display in Houston, TX this Satarday on the anniversary of his birth. IndoLink reports:

The statue, sculpted in India by renowned artist Ram Sutar, has been gifted to the citizens of greater Houston by the Indian government as a gesture of goodwill and friendship.

The six-feet bronze statue will be unveiled on October 2, the birthday of Mahatama Gandhi, in the city’s landmark — Hermann Park, which is frequented by millions of tourists each year.

In 2002, a low-caste Pakistani village woman was sentenced by the village panchayat to be gang-raped in retribution for a crime allegedly committed by her brother. The sentence was carried out by four high-caste men, and she was sent home walking naked through her village. But she fought back:

…instead of killing herself, Ms. Mukhtaran testified against her attackers and propounded the shocking idea that the shame lies in raping, rather than in being raped. The rapists are now on death row, and President Pervez Musharraf presented Ms. Mukhtaran with the equivalent of $8,300 and ordered round-the-clock police protection for her.

These sorts of tribal customs are revolting in all cultures. I only wish she’d gotten her hands on a Remington a la Phoolan Devi, the Bandit Queen.