Earlier this year, I was traveling in South Asia collecting stories for a project I’m working on. Along the way, I met Taru Dalmia aka the Delhi Sultanate at a BASSFoundation drum and bass party in New Delhi. A dancehall/reggae/dub MC, I was surprised when he jumped on the mic. I didn’t even realize there was a reggae scene in India. For someone who hadn’t been to The Islands, he had a sick patois on the mic. At the time, he was telling me about a project he was heading out to start working on – a collaboration with a revolutionary singer out in a village outskirt of Delhi.

The project is complete. But after watching the video, it feels like maybe it’s just started. Check out the 12 minute short film, titled “Word, Sound & Power” about the dalit singer Bant Singh.

Amazing, right? The film production is so clean and the musical sounds are fresh and tightly merged.

Bant Singh from Jabbar Village in Punjab is a legendary singer and activist of Kisan Mukti Morcha… The film critically examines the need for the voices of dissent in todays capitalized urban society. Also a deeper look into Bant Singhs background, his lyrical inspirations, 20 years of the unsung dalit struggle in Punjab, followed by the mash up of genres between Chris, Delhi Sultanate and Bant Singh. A bold attempt to fuse socially relevant issues and lyricism across two different languages. [wordsoundandpower]

No word on if there are plans to turn this into a full length or if there is going to be a full length album to come out of this project. It seems that the film is making the rounds at screenings in India, but I wouldn’t be surprised if it gets picked up on the international film festival circuit. Keep an eye on their website at Word Sound and Power – I get the feeling the music should be downloadable there very soon. As soon as it is, I’ll be downloading it ASAP. I have a feeling you might too. END_OF_DOCUMENT_TOKEN_TO_BE_REPLACED 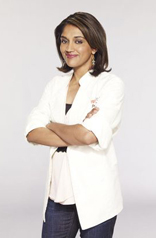 The latest desi entrant to the reality TV world, Chicago pastry chef consultant Malika Ameen, has a spot on the premiere season of Top Chef: Just Desserts. The series is a Padma Lakshmi-less but pastry and pompadour-laden spin-off of the popular Top Chef.

In its initial quickfire challenge, Ameen’s meringue was all wrong, mostly because she didn’t complete the coconut concoction in time. But the cookie couturier to the stars hustled for the next round, producing a decadent and bittersweet chocolate dessert for the elimination challenge. It made the cut and kept her on the show for another week. END_OF_DOCUMENT_TOKEN_TO_BE_REPLACED

I finally got to see Hari Kondabolu perform a couple of weeks ago when Laughter Against the Machine brought him through Oakland. It was my first time watching him live, and I couldn’t help but notice how even though our table of brown folks was laughing hysterically, there were definitely a few jokes on our racist society where the white folks in the room were squirming uncomfortably. He took it there, and then some.

Since I can’t take you there, I’m going to take you here.

In this clip, Hari and his brother Ashok i.e. Dapwell (“Dap” of Das Racist) do a read outloud of the infamous Joel Stein article “My Own Private India” (can we call it “Stein-gate”?). We had quite an active week when that article came out (Anna’s response here) and though Kalpen Modi’s article in the Huffington Post my favorite response, The Kondabolu’s response comes in a close second. The Untitled Kondabolu Brothers Project, which is basically what you get when these two hit the stage together, perform in NYC about once a month.

We’ve been doing our show for a little over a year now. It’s a loosely structured talk show. I need structure, but Ashok doesn’t like that so much, so we have set pieces with jokes I’ve written but enough room for him to go off on tangents. Watching Ashok roam is the spectacle. Whether it’s funny or not, it’s always interesting….People seem to love the dynamic between two brothers arguing and discussing pretty much anything in the World. The show is very natural to us and it really ends up being a conversation we could have anywhere. [mtviggy]

It started to drizzle as I waited for Tasneem on the Santa Monica Pier early on a July summer day. I couldn’t believe it. It never rains in Southern California but here it was, middle of summer and it had started to rain. Luckily, by the time Tasneem arrived, guitar and all, it had turned into a beautiful day for a ferris wheel ride.

Tasneem, otherwise known as Jungli, is back for a brand new edition with a whole new sound. A New York transplant to California, she’s taken the coastal change and reinvented herself and her singer-songwriter sound into a new Cali-vibin’ freshenss. She’s working on a new E.P. The Animal Days Are Gone set to be released in the next few months. Check out my one-on-one ferris wheel interview with the infamous Tasneem. She talks about why she makes conscious music, how she loves Bat for Lashes, and how her dad would make them listen to Afro-Pop on the drive to weekly prayer.

I realize the interview is kind of long, but I had a hard time editing it down. We had a lot of fun on our quasi-date and Tasneem is very personable. Conducting interviews on ferris wheels are my new favorite thing to do, and getting a personal concert while in a ferris wheel bucket was one of the highlights of this summer. Check out the following video where Tasneem sings “Mark Wahlberg” and you’ll see just what I mean. END_OF_DOCUMENT_TOKEN_TO_BE_REPLACED

You know the great art of stripper pole dancing that we see performed at the local gentleman’s club? Turns out everything-is-from-India-Uncle could be right… pole dancing it turns out IS from India. Watch and thank me in the comments (thanks Sushil).

Mallakhamb was introduced as a supporting exercise for wrestlers. “Pole mallakhamb” was started by Balambhattdada Deodhar sometime between 1800 and 1810. The mallakhamb pole used in competitions is a straight pole made of teak or sheesham wood, standing 2.6 metres (8.5 ft) in height with a circumference of 55 centimetres (22 in) at the base. [wiki]

Pole dancers in the West could learn a move or two from these Mallakhamb acrobats. I’m just saying. END_OF_DOCUMENT_TOKEN_TO_BE_REPLACED

He won his Democratic primary election for his bid for Congress by only 672 votes, affirming the importance of “every vote counts.” But that’s only half the fight as Election Day on November 2nd is only two months away. Manan Trivedi is a doctor, a policy analyst, an Iraq veteran and… my former classmate at UCLA. I was excited to see him at Netroots Nation, even if it was only for a day – he had to fly back to DC to sit on an IALI panel with Jay Sean. Manan was generous enough to give me a few minutes out of his busy day to do an interview for The Mutiny. Here’s what he said.

More from #NN10 to come… END_OF_DOCUMENT_TOKEN_TO_BE_REPLACED

As many of you know, last month I got the chance to attend Netroots Nation 2010. It was the fifth annual gathering and I was graciously a recipient of one of the scholarships given out by Democracy for America. It was an amazing conference of about over 2,000 progressives, politicos and internet social media moguls. And of course, bloggers. You can read about my experience on my blog (Part 1 and Part 2).

The whole time I was there, I couldn’t help but play “desi-spotting.” At first I felt a little weird about it, but seeing as how I was going on behalf of a South Asian American blog and I was the only blogger I found repping a South Asian space, I considered it “ethnic-targeted marketing” after a while. There were about a couple dozen Desis there too. I met some great people and grabbed some amazing stories.

With all this talk of elections, I was excited to meet an actual Desi elected while at Netroots Nation. Ash Kalra is a council member for the city of San Jose. Check what he has to say.

More from #NN10 to come… END_OF_DOCUMENT_TOKEN_TO_BE_REPLACED

I have two videos for your viewing pleasure today.

In the total wingnut corner we have this “patriotic” anthem by Trade Martin making the rounds in conservative circles. It reminds us why graduating from college is so important in the modern day:

And in the opposing corner we have this video by Malini Sur, a surgery resident / singer songwriter in New York:

“[When] the [Virginia] bill for establishing religious freedom… was finally passed,… a singular proposition proved that its protection of opinion was meant to be universal. Where the preamble declares that coercion is a departure from the plan of the holy author of our religion, an amendment was proposed, by inserting the word “Jesus Christ,” so that it should read “a departure from the plan of Jesus Christ, the holy author of our religion.” The insertion was rejected by a great majority, in proof that they meant to comprehend within the mantle of its protection the Jew and the Gentile, the Christian and Mahometan, the Hindoo and infidel of every denomination.” –Thomas Jefferson: Autobiography, 1821. ME 1:67 [Link]

Well, I guess there was a good reason why the conservative school board in Texas decided to expunge Jefferson from textbooks.

END_OF_DOCUMENT_TOKEN_TO_BE_REPLACED

A week and change ago I blogged about the awesome Nimmi Harasgama and her invented auntie: netta, a dame with a mouth blunt enough to make even your amma’s honesty look as soft as rasmalai.

Speaking of Amma, one of the videos I linked to in that post included part of netta’s collaboration with D’Lo, who referenced an “Amma” character. Herewith, a few more of those joint sketches, including appearances by Amma herself… and if the tickets haven’t all gone yet and you are in New York, then, you lucky reader, you can get a ticket and see D’Lo live tonight at D’FunQT : A BIG D’Lo SHOW. (You can pronounce it “defunct.” Did I mention TONIGHT? It’s part of Dixon Place’s 2010 HOT Festival.) Wish I could go! I met D’Lo a few years ago through mutual friends, and… what an actor! what a mimic! what a riot!

The show is described as “a stand-up story show with tales from the QT side mixed in with a Sri L.Ankan twist. D’Lo the artist explores topics relating to South Asia, transgender social justice, hip-hop culture, loneliness, and the resilience of the human spirit.” I’m struck by the mention of loneliness; one of the most touching things in the videos I’m linking below is the genuine sweetness of D’Lo’s attempt to alleviate auntie netta’s loneliness.

Here’s some more D’Lo / Nimmi stuff, and then, below the fold (can I say that on a blog?), Nimmi answers questions about a few things, including their collaboration.

END_OF_DOCUMENT_TOKEN_TO_BE_REPLACED

Oh M.I.A…. How we loved you at The Mutiny when you first came out, hustlin’ like a brown around town. Only five years later…. how far you’ve fallen. (h/t Ateqah)

This video was hilarious while being oddly depressing. It echoes with truths. The actress in it is Lindy Jamil Gomez, a Spanish-Lebanese comedian out of N.Y.C. I hope she’s prepared to get a sternly worded tweet from M.I.A.’s wrath. M.I.A., I still love you tho! I’ll keep buyin’ your music! Um, unless I can get it online for free….you know…! END_OF_DOCUMENT_TOKEN_TO_BE_REPLACED