The horrible treatment South Asian workers receive in Arab nations has been receiving more and more press coverage of late. Hopefully, the spotlight will ensure that something changes for the better but until then, it’s our job to bring forward stories like this –

The imminent execution of a teenage maid in Saudi Arabia drew fierce criticism yesterday…According to the Saudi authorities, Rizana Nafeek admitted strangling the four-month-old boy while feeding him with a bottle.

But Nafeek, whose job was not meant to include child care, has denied making any such admission. She claims the child had begun to choke before losing consciousness in spite of her desperate efforts to clear his airway.

Tonight is the deadline for appeals in the case.

This criminal trial is especially ghastly on 2 counts —

Kate Allen, the director of Amnesty International UK, said: “It is an absolute scandal that Saudi Arabia is preparing to behead a teenage girl who didn’t even have a lawyer at her trial. The Saudi authorities are flouting an international prohibition on the execution of child offenders by even imposing a death sentence on a defendant who was reportedly 17 at the time of the alleged crime.“

END_OF_DOCUMENT_TOKEN_TO_BE_REPLACED

How do you solve a problem like Maria Musharraf? It’s so dang hard to figure out what we should (much less can ) do with him. Lets be clear, by nearly any measure, he sounds like a pretty awful leader. And yet, perhaps he’s a Stalin in our conflicted time — someone we’d otherwise hate but whom other, more pressing international circumstances force us to extend a bit more, uh, courtesy than we’d like. If his umpteen missteps have brought us to the verge of actively “regime changing” him (a great read, BTW!), then perhaps this latest diatribe from the Hitler of our time (no, not Bush, sheesh) wins Mushie back a few more points –

I talk to you today on the occasion of the criminal aggression carried out by Musharraf, his army and his security organs – the Crusaders’ hunting dogs – against Lal Masjid in Islamabad, and on the occasion of the dirty, despicable crime committed by Pakistani military intelligence – at the orders of Musharraf – against Maulana Abdul Aziz Ghazi when it showed him on television in women’s dress.

This is a message of blinding clarity to the Muslims in Pakistan, the Pakistani Ulema, and indeed, the Ulema in the rest of the Islamic world, and this crime can only be washed away by repentance or blood. I call on the Ulema in Pakistan and tell them: this is what you are worth to Musharraf, and this is the treatment that awaits you in the prisons of Musharraf’s hunting dogs, and this is what you are worth to the Crusaders. Musharraf and his hunting dogs have rubbed your honor in the dirt in the service of the Crusaders and the Jews, and if you don’t retaliate for your honor, Musharraf won’t spare any of you, and won’t stop until he eradicates Islam from Pakistan. Lowly Musharraf, who has sold his honor and religion to the Crusaders and Jews, is arrogant with you in the extreme and regards you with the utmost contempt, and treats you like animals and dogs, and only is satisfied by portraying you in the lowliest and most despicable light.

This is an eloquent message [from Musharraf] to every scholar and every free and honorable person in Pakistan: that resisting Musharraf, confronting him and demanding that he adhere to Islam and refrain from worshiping the Crusaders and Jews will only get you the worst types of contempt, humiliation and degradation.

Of his litany of complaints, it’s almost comical that perp-walking Ghazi on TV in a dress ranks quite so highly. Perhaps there’s some insight here into the Honor/Shame dynamic commentators have noted in the shadowy corners of Arab society that breed Zawahiris…. Whatever the case, if the other guys think he’s out to destroy Islamism, then perhaps there’s another twist to this Gordian Knot. A tough problem to solve indeed.

END_OF_DOCUMENT_TOKEN_TO_BE_REPLACED

Ultrabrown posted some picts from last weekend’s cheek swab fest in NYC. Vinay Chakravarty and his wife showed up and, as Manish points out, it’s almost weird how much revelry the event managed to create… 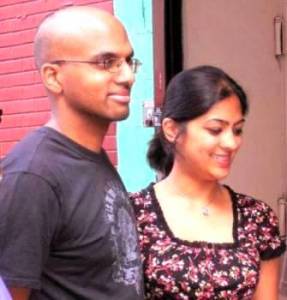 Additional events are happening all over the country to help Vinay, Sameer and countless others in the future.

In particular, this weekend, Bay Area volunteers are hosting their MEGA DRIVE spanning over a dozen sites.

So here’s a little game to liven things up & help get the word out — snap a pict or 2 of you and your friends getting your cheeks swabbed and/or holding up your donor cards, send ‘em to ME (vinod@vinod.com), and, in the spirit of the Desi Dad project, we’ll post some of our fav mug shots on SM and Ultrabrown alongside these folks –

END_OF_DOCUMENT_TOKEN_TO_BE_REPLACED

An anonymous tipster alerted us via the News tab to a possible racist/scandalous/nebulous slip of Michael Moore’s tongue. I sat through the entire, excruciating 10+ minute video at Breitbart.tv, only to discover that the controversial part is at the end; the video I posted below features the last eleven seconds of the entire segment and contains the relevant moment.

Well? What do you think? Racist or immature? Mispronounced or intentionally mangled? Or is this much ado about nothing? Comments on Breitbart were hot, heated and divided about whether or not Michael Moore started to channel Apu. What say you?

END_OF_DOCUMENT_TOKEN_TO_BE_REPLACED

The posts about Vinay and Sameer make it worthwhile to highlight and remind people that there *are* success stories out there. As many nonprofit volunteers can tell you, the single best cure for donor fatigue is a tangible example. For Vinay & Sameer, our local SF press highlighted this very recent one –

Bedi said she was “honored and ecstatic” when she found out her stem cells were a match.

“It was a privilege to do it for someone,” she said. “I would hope that they would do the same for me, if I was in their shoes.”

…”I know she’s 54 years old and that she has leukemia,” Bedi said. “They won’t release her ethnicity, but, yeah, she’s East Indian.”

Meenu was registered via a Team-in-Training program sponsored by the Leukemia and Lymphoma Society.

As rare as matches are, what’s even more sad is the occasional response to a match (a problem which, sadly, Vinay appears to have run into) –

“We often get a lot of people to sign up,” [Program Director] Vlume said, “but the unique problem is getting people to say ‘yes’ after we’ve made a match.”

She said that sometimes, as many as 70 percent of people deemed matches decline to go through with the process.

“They want to look like they’re doing a good thing, they want to show they support the community, but in the end they never really wanted to do it in the first place,” Vlume said.

END_OF_DOCUMENT_TOKEN_TO_BE_REPLACED

One of YouTube’s commentors tries to explain things –

This is a rite of passage in India. It has not fangs and it’s mouth is sewn shut. Also, it has no constricting force so it’s less dangerous then a dog or cat.

… And discussion on urban-mythbusting website snopes.com seems to concur. Any mutineers have insight here? I mean it’s one thing to teach a baby not to fear *this* snake but rue the day he should start fearing all snakes.

END_OF_DOCUMENT_TOKEN_TO_BE_REPLACED

Ever vigilant mutineer and desi in NJ Shlok alerted us to a second browning of Post Secret: 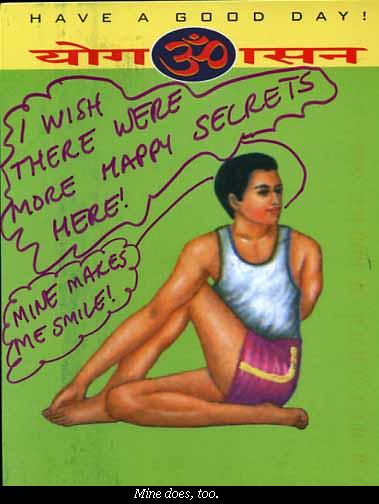 A few of you have sent in tips about Anand Jon’s latest legal issues. Here are some blockquotes about the dirty and disgraced designer, which I ganked from Reuters:

A celebrity fashion designer already accused of raping or sexually assaulting 12 women and girls who came to him as aspiring models was charged on Tuesday with attacks on six additional victims.

Los Angeles prosecutors have now charged Anand Jon, an Indian-born designer who has appeared on the popular television show “America’s Next Top Model,” with a total of 46 counts involving 18 victims, all with ties to the fashion industry and between the ages of 14 and 27.

Anand Jon Alexander, who was notorious for being a douche to our girl Julie Titus during season 3, is out on bail.

The charges against Jon include forcible rape, sexual battery, sexual penetration by a foreign object, sodomy by use of force, forcible oral copulation, false imprisonment by violence, assault with the intent to commit a felony, lewd act on a child, contributing to the delinquency of a minor and sexual exploitation of a child.

Oh, and as for the title of this post…Jon cut his “trademark” flowing tresses. Seventy percent of you had no idea he even had long hair, and I applaud you for your ignorance. Sepia Mutiny: we read TMZ so you don’t have to. END_OF_DOCUMENT_TOKEN_TO_BE_REPLACED

As Abhi points out, one of the key elements of the proposed immigration bill was a Canadian-/Aussie-style points system to allocate immigration spots. The overall bill failed.

The proposed point system, however, was pretty interesting. The general goal was to provide a more systemic, color-blind way of sorting the through the massive pool of applicants. Factors like English proficiency, degrees, and occupations would be allocated values and the sum determined where in the stack you ranked….

Of course, the world being the non-uniform soup it is, the second you start calling some traits more ‘desirable’ than others, you’re going to run into, uh, disparaties in how frequently those traits are found across ethnic groups. Towards this end, the NYT published this very interesting chart which showed how, based on the past 15 yrs of immigration data, a few select groups would have been allocated points. By my eye, Desi’s would have scored rather conspicuously well….

END_OF_DOCUMENT_TOKEN_TO_BE_REPLACED

There were several opportunities to join the NMDP’s database today; how many of you got swabbed? Tomorrow, there are drives in Fremont, Torrance and Cerritos– leave a comment and let us know if you went. More drives are planned, all over the country, during the next few weeks. Find more information about that here.

This reminds me of voting; it involves registering and we say we’re going to do it, but then we don’t always follow through. It’s one thing to be aware of Vinay’s situation, quite another to have actually done something about it. Don’t you want to be in the latter camp?