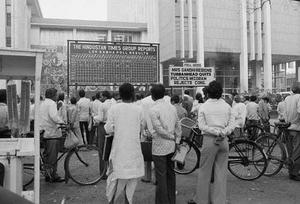 Thanks for the good times SM readers. It’s been fun, but you and I both knew this would be temporary. Go on, you’re still young, you’ll find someone who’ll treat you like I did. Please, no tears.

END_OF_DOCUMENT_TOKEN_TO_BE_REPLACED

Anil Gupta, the producer of Goodness Gracious Me and The Kumars at No 42 and executive producer of The Office and number 5 on the Most Powerful Asian in British Media list is about to come out with an irreverant animated comedy which follows the exploits of three exceptionally naughty girls – Keisha Marie, Natella and Latrina – one maverick headmaster, Iqbal, and a group of desperate, overworked and underpaid teachers. END_OF_DOCUMENT_TOKEN_TO_BE_REPLACED 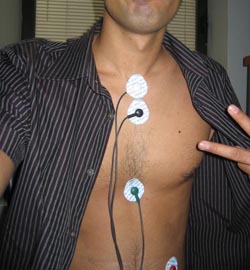 WhatÂ’s funnier that having someone search your bag before getting on a NYC subway? How about being searched because you have wires on your chest than lead to a small black box on your belt while you are trying to get on the subway?

A friend just emailed this picture of himself with a portable Holter EKG that is monitoring his heartbeat. He uses the subway and NJTransit to and from Manhattan.

Something box-like on your belt Â– check.

It was bound to happen sooner or later and this past weekend it happened to me. My black backpack was searched. It wouldnÂ’t have been remarkable if it happened at a mass transit checkpoint. After all, statistically there was a good chance since I take the New York City subway and LIRR trains on a daily basis. But my brush with long arm of the law took place about 50 miles from Manhattan while standing in line to board a ferry to Fire Island.

For those of you not from the New York area, Fire Island is a small island off the coast of the southern fork of Long Island, New York. In the 1930s and 40s it was a haven for artists and writers and slowly turned into a summer retreat for mostly gays and lesbians. Today, Fire Island is synonymous with Â“gay beachÂ”.

My wife son and I were with in line with our friends (a lesbian couple and their baby) waiting to board the ferry. As they opened the gate, and the line started to move, I shuffled along with the others in line. Right before I got I stepped on board, I was approached by a man in dark glasses. If he had asked me for my number, I would have been flattered.

Â“Sir, do you mind stepping aside? I just need to check your backpack.Â”

Â“SureÂ”, I said, and stood there while he checked my bag which was still strapped to my back.

After a cursory glance, he said Â“All done. ThatÂ’s itÂ”

As I began to leave, he said Â“Hold on, let me zip you up firstÂ”

He closed my bag and I stepped on to the ferry to join my family and friends.

After taking a seat on the top deck I looked to see if others were being checked. No one else was under scrutiny. Our friends who were renting a place on the island for the weekend met as us and while we were settling in one of them asked Â“Did they stop and check you before you boarded the ferry?Â”

Â“Yeah, they checked my bag and after that I stepped out of line to see if they were doing this to others. I stood there counting to see if it was every 5th person or if there was a method. But I was the only one they searched.Â”

Now I must add that my friend who was searched is gay, Guyanese (Indian descent) and dark-skinned and I of course had a three day growth of beard.

IÂ’d like to think they were screening us to make sure werenÂ’t smuggling in anything that would take away from the Â“fabulousnessÂ” of the island. END_OF_DOCUMENT_TOKEN_TO_BE_REPLACED

The BBC reports that Pakistani President Pervez Musharraf has ordered all foreign students, some 1,400 pupils, to leave the country’s madrassas.

Madrassas have been in the spotlight after one of the London bombers was reported to have studied at one. The move against foreigners at the madrassas also applies to Pakistanis holding dual nationality, the AFP news agency reports. Gen Musharraf also told journalists that action would be taken against any of the madrassas that did not register with the authorities. After the 11 September attacks on the United States the Pakistani government tightened the rules around madrassa visa applications, saying that the visas would become invalid once a student ceased to study at the school. [Link]

Four years after September 11th, this is a bit too little and too late. Sounds like Rumsfeld or Condoleezza must be applying the ‘camel clutch’ on him. END_OF_DOCUMENT_TOKEN_TO_BE_REPLACED

September’s Atlantic magazine has a breakdown of how countries fared after the takedown of an authoritarian government.

It is by now a truism that ousting an authoritarian regime is often far easier than sustaining freedom afterward. A recent study from the human-rights organization Freedom House argues that “people power,” rather than top-down reform or armed revolt, has the best chance of achieving that result. Researchers examined sixty-seven such political transitions over the past thirty-three years, and found that those countries in which regime change was brought about by nonviolent civic resistance were more likely to be “free” or “partly free” today than countries in which political elites alone had launched the transition or opposition groups had used violence to topple the government. Five of the forty-seven countries that experienced generally peaceful transitions are currently rated “not free,” compared with four of the twenty countries in which the opposition employed violence. As for Iraq’s future, the study offers no guide: only three of the transitions examined were driven by external interventions, with one state (Panama) currently rated “free,” one (Bosnia) “partly free,” and one (Cambodia) “not free.”

A colleague told me this and I hope it brings us up from all the recent doom and gloom. Yes, it has a few of the hallmarks of an urban legend but the punch line doesn’t involve severed limbs, hastily scrawled messages on a mirror, or anyone winding up in a bathtub full of ice and a missing kidney.

“My girlfriend’s best friend’s boyfriend works for a ‘famous online travel agent’. They outsource their IT to Delhi in India. The UK office has been forwarding IT related emails to the Delhi office with the subject line ‘FYI’ and for the last 6 months, the Delhi office has replied with messages entitled ‘FYE’. No one at this ‘famous company’ knew what this stood for, so finally today someone questioned itÂ…” END_OF_DOCUMENT_TOKEN_TO_BE_REPLACED

I can picture it now; some fat cat producer and a sweatshop of screenwriters churn out the same old pap then decide to inject some excitement into the plot when the hero/heroine/villain decides to train/prance/meet somewhere other than India.

Â“I want skyscrapers! Lots of them, and maybe some bridges, they have railings that come in handy for the dance sequence. Get me some damn railings!Â” says the director.

Â“And cars, sleek fast sports cars Â– convertibles, they have to have the top down for the song sequence!Â” Get me some fast convertible cars dammit.” (IÂ’m picturing the Indian version of the 1940s Hollywood executive here barking these in Hindi)

This is when a producer usually chimes in since he has a good chunk of change invested.

Â“Can we get some gardens or amusement parks in the sequence?Â”

Â“Yeah, get me some g**damn amusement parks!! If we need to reserve Six Flags in New Jersey for a whole week, just do it!Â” END_OF_DOCUMENT_TOKEN_TO_BE_REPLACED

The Christian Science Monitor reports that collecting contemporary Indian art is the new rage in the art world. Some pieces are fetching anywhere from $50,000 to $70,000.

“The market for Indian contemporary art is turning bullish and aggressive,” says Anuradha Mazumdar of Sotheby’s. “India is now recognized as a major growth market, forcing international auction houses to pay more attention to it.”

I guess the big bucks that NRIs and Indian dot-commers are raking in have to be spent on something. But it isnÂ’t all FUBU (For Us By Us). Demand for these pieces is coming in from various parts of the world including France, Germany, Japan and the Middle East.

IÂ’m getting in on the ground level on a promising young surrealist. HeÂ’s going to be big some day. END_OF_DOCUMENT_TOKEN_TO_BE_REPLACED