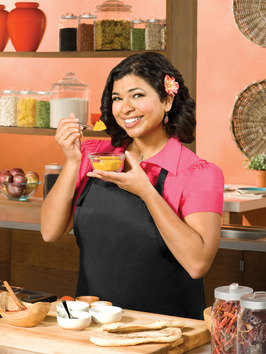 After several months of waiting, the “Next Food Network Star” has been announced, and it is none other than fellow desi Aarti Sequiera! Lakshmi did a brief write up on Aarti as the competition to select the Food Network’s next celebrity chef began, and now we can see the results come full circle. Aarti’s show, currently titled “Aarti Party,” will be the first cooking show on national American television to focus on Indian food, and be hosted by an Indian American.

I consider myself to be an amateur foodie, and between tasting new cuisines, learning how not to starve to cook, and avidly reading others’ food blogs, I always make time to enjoy the veritable smorgasbord of culinary shows. If there are any other foodie mutineers out there, you will know that the Food Network is often mocked for its commercial drive, and celebrity chefs who are more celebrity than chef. I usually don’t watch the Food Network unless I feel like listening to Paula Deen’s comforting southern drawl, but in between seasons of “Top Chef,” “The Next Food Network Star” keeps me satiated.

I have been watching “The Next Food Network Star” since its start, and the Food Network for even longer, but it wasn’t until the third season of TNFS that I noticed something about the Food Network…its lack of diversity in both food culture and the ethnicity of its hosts. One of the contestants on that season, Joshua “Jag” Garcia, was disqualified from the competition after it had been revealed that he lied about some of his culinary experience. In his exit interview, he mentioned how the Food Network has no Latino chefs or shows featuring Hispanic cuisine, and he had hoped he could be the first to bring his culture to the channel. Shortly after, Food Network produced “Simply Delicioso.” Around the same time, the first African-American hosted cooking show premiered, “Down Home with the Neely’s.” END_OF_DOCUMENT_TOKEN_TO_BE_REPLACED 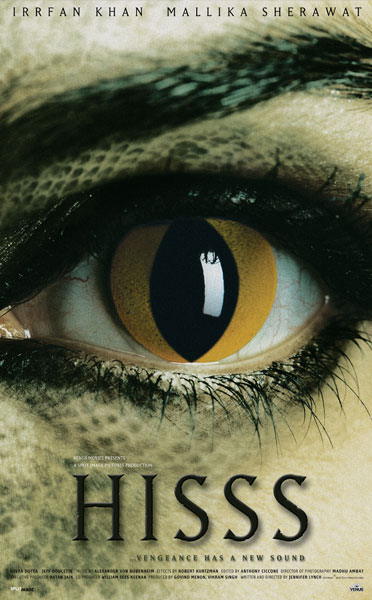 This isn’t your grandmother’s Nagin movie–this is “Hisss,” the Split Image Production directed by American Jennifer Lynch, daughter of the famous David Lynch. The story of the Nagin is a classic in Bollywood, and has been portrayed in film and television for decades, even by such high-brow names as Sridevi, Vyjayanthimala, and Rekha. Most often the tale follows the basic plot of somebody angering the mythic Cobra goddess by killing/capturing her husband-snake and thus she exacts her supernatural vendetta on said human. And of course, in true Bollywood style, there are a plethora of songs, some of which have become quite infamous. This formula for a Nagin movie may have been popular in India several decades ago, but for a movie to be successful in today’s India, much less in front of an American audience, a Nagin story would need a major re-telling.

If you can get past the cringe-inducing title, there seems to be quite a lot this film has to offer that many recent Bollywood/Hollywood crossovers failed at. In fact, while some may claim that the two cinemas are a perfect match, the epic flop of Hrithik Roshan’s recent movie, “Kites,” would show that it may be simply impossible to perfectly please both audiences. And now where superstars Rai and Roshan have left off, the sex symbol Mallika Sherawat steps in, along with the great Irrfan Khan, who, coming hot off a role in Slumdog Millionaire, is back on the world stage to play co-star to Sherawat. END_OF_DOCUMENT_TOKEN_TO_BE_REPLACED