The NFL has its first minority owner and he happens to be a Pakistani-American. Shahid 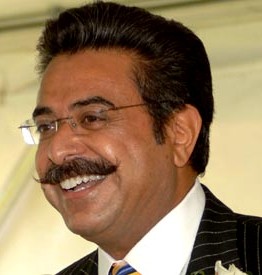 Khan, an Illinois businessman who owns the Flex-N-Gate Group, which makes automobile parts, is paying a reported $760 million to buy 100 percent of the Jacksonville Jaguars from Wayne Weaver. Yes, you’re going to see a brown man with a handlebar mustache giving high-fives in the owner’s box. How cool is that?

Khan, 61, came to America when he was 16, earned an engineering degree from the University of Illinois and fell in love with American football and a blonde named Ann Carlson. Over the years, Khan and his wife have given zillions to their alma mater.

Most recently, the couple made a $10 million donation for the Khan Annex to Huff Hall, home to the university’s college of Applied Health Sciences. “One of the great joys of my life is making money,” Khan said at the September dedication ceremony. “ … What makes it even better is to use it to make a difference.” [Florida Times-Union]

The big question hanging in the air in Jacksonville is whether Khan will keep the team in the city or try to move it to L.A. So far, Khan is saying all the right things, but will he be able to resist the hundreds of millions he could make by moving to a much larger market?

It will also be interesting to see whether Khan keeps a low profile or seeks the limelight. Will he be the type of owner who’s on the sidelines, chatting with players, and always ready to make comments to the media? Or will he stay in the background and let his coach and general manager run the show? If he enjoys being in the news, then you can bet that L.A. will be very tempting.