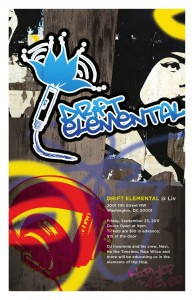 The second is Baltimore based Koushik Chatterjee, otherwise known as Ko the Timeless. Inspired by his Bengali music performing parents and indoctrinated into hihop with the lyrics of Tribe Called Quest, Ko’s first mixtape The Subway High Life can be downloaded here.

Raja Wilco hails from NYC and has been on the music scene since 2004. He’s been on the scene a minute, having performed with Juggy D, Rishi Rish and Jay Sean.

Finally, the night will be spun into a frenzy with the DJ-ing skills of DJ Insomnia including a history lesson of South Asian hip-hop. You can download his mixtape Premier Sessions: NYC R&B Edition.

Be sure to get your tickets now! It’s $10 if you buy now online, and $15 at the door. And if you do go, please let us know how it went in the comments. I’d love to hear how these artists are.