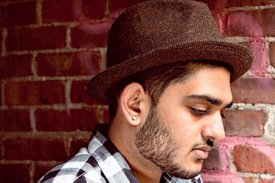 This talented young vocalist replied to a few questions, and his answers are posted below. He continues to perform classical vocals as he pursues singing and songwriting in the contemporary urban/indie genre. An announcement for a vocal concert, a past performance in San Francisco, highlights his background from the classical tradition: > Siddharth Sriram is a disciple of Padmabhushan P. S. Narayanaswamy, and has garnered attention as a young artist in Carnatic music. One of Chennai’s most storied concert halls, Krishna Gana Sabha, awarded Siddharth its Chembai Award in 2005, named after an early 20th century vocalist renowned for his bold vocal technique and his

Continue reading to find out more about Sriram’s musical influences, how going to Berklee has changed him, and his future plans for performing in the Carnatic and contemporary American genres.

I read that you became interested in music and singing as early as age three when you started vocal training with your mother. How has your interest in music evolved over the years? Who are your current influences?

When I first started learning Indian Classical music with my mom, I was only 3 so my attention span wasn’t the best, but I guess I always had a huge passion for music. Starting this early helped me delve into music as a whole as I grew up. I grew up learning and performing Indian Classical music and got into R&B/Pop around 8th grade. Currently some of my influences with the urban/indie/pop music are Stevie Wonder, Kanye West and Coldplay.

What’s it like attending Berklee? How has it affected your music?

p>Attending Berklee is one of the best decisions I’ve ever made. Soon after coming here in the Fall of 2008, I realized what a great environment it is for students of music/music industry. The faculty and facilities are amazing, but I think my favorite part about this school a student body that is so fully into so many different forms of music. The interactions and relationships I’ve made here have increased my knowledge, curiosity and inspiration musically. Also, before I came to Berklee, I had never written a song, but coming here really pushed me to challenge myself. Now, songwriting is one of the most integral aspects of my artistry.

You’ve received praise and recognition for your classical Indian vocal performances and also for your contemporary American vocals in original tracks and YouTube cover songs. What do these different styles mean to you, and will you continue to perform both styles of singing?

I am always going to perform both Carnatic and my contemporary American music, giving just as much importance to both. I got into singing through the Carnatic genre and it makes up the foundation of my musicality. From a fairly young age, I grew up singing both and now both make up my profession. Both allow me to express myself emotionally and intellectually, but in different ways. I guess both forms of music just satisfy me in different ways, and I have the ability to keep both going with the same amount of intensity, so why give either up?

The lyrics of Limitless suggest a sky-high feeling of dreams, hopes and anything else being possible. Does that reflect how you feel now? What do you hope for in terms of your music?

I do feel that way right now! That song was actually written in a low point in my life, and the process of writing it brought me back up. Writing that song helped me realize that I have control over where I go and the decisions I make. I want to be a multi-faceted musician, and I’m getting my degree in Music Production and Engineering at Berklee. I’m very excited for the future and to see where I’ll be a couple years down the line. I want to use all the skills and interests I have to become a household name, performing around the world and spreading some honest and exciting music.