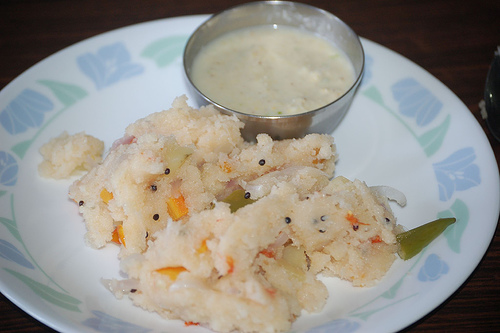 Given the recent praise and admiration expressed for the humble dish known as upma following its Top Chef Masters appearance (Three cheers to upma, Upma still a hot hit, Up, Up Upma!, One upma-nship), you may want to ward off the evil eye the next time you have some, maybe with a pinch of salt or chili powder. Dressed up with chicken stock, mushrooms, coconut milk and kokum by Cardoz, his upma (picture, recipe) caught the attention of the show’s judging panel. Cardoz made the dish to evoke one of his earliest memories of food; the second dish reflected the moment that inspired him to become a chef, and the third was chosen by a randomly assigned judge (James Oseland) to reflect the dish that made the judge decide to pursue the career of a food critic.

Critic Ruth Reichl was very taken with Cardoz’s upma. “The more attention you give it, more and more flavors start ricocheting around in your mouth.” She declared it brave to do the up-ma and described it as really taking a chance to put out a dish that simple. That simplicity made Gael Greene doubtful. “I  don’t know about this,” she said, suggesting that it was too simple. James Oseland really liked Floyd’s upma and praised the food. “He took this utterly plain Indian home dish yet made it elegant.” See how they decided to vote for Cardoz.

Cardoz, who celebrated his win by nursing a champagne hangover and heading over to Dosa Hutt in Queens, will be opening North End American Grill in Battery Park, NY. His win raised $100,000 for the Young Scientists Cancer Research Fund in honor of his dad, who died from cancer. He joins two other chefs who have won the title of Top Chef Master–Rick Bayless, known for his Mexican cuisine, and Marcus Samuelsson, whose cooking includes influences from Swedish, Japanese and African cuisines.

Clips: Contestants instruct their initially unidentified partners on how to cook their dish. Cardoz is paired with his sister, though he does not realize it is her.

Suvir Saran, eliminated earlier in the series after taking a stand on vegetarianism, talks about his elimination and his fun experiences on the show.

20 thoughts on “Upma on Top Chef Masters: Breakfast of Champions”