I recently had a discussion with a columnist on Asian American issues about my own identity as a brown person who self-identifies as a conservative. It’s rather amusing to me that the mainstream media is far more curious about my rare intersection of identities (e.g., interest in my combination of atheism and right-wing orientation), than the preponderance of my online production in science, which is perhaps a touch too abstruse for the general public. 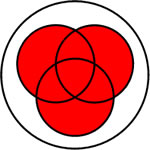 But much of the back & forth hinged upon definitions. For example, I use the term “brown” regularly. But what does that mean? First, a word is a word, and anyone can “own” a word. I’m not the pope of terms like “brown” or “desi,” their meaning crystallizes through bottom up consensus. But my own definition makes recourse to the set theory concept of a union. That is, for me the identity is not a intersection of necessary preconditions, but a wide collection of identities which can be usefully bracketed together. So when asked why I considered myself brown, the reality that I’m racially a brown person, and will be until the day that I die. I could relocate to Japan, marry a Japanese woman and change my name, and become initiated into Shinto rites, but I’d still be brown in terms of my racial identity. For me the brown-as-race definition works well enough that I don’t need to think about it too deeply. But there other flavors out there. There are descendants of Ananda Coomaraswamy all across the United States. Many have the surname Coomaraswamy, but as their South Asian ancestry is sharply diminished they look like typical white Americans. Whether these people identify as South Asian or not, they sport a name which brings attention to the origins of one of their ancestors. You can actually find many of these people on Facebook, so if there’s an intrepid journalist who wants to write up a feature on this family it wouldn’t be too difficult. In a similar but more obscure vein a friend recently inquired about the Indian-sounding surname of one her customers from Philadelphia. To make a long story short it turns out that in the early 20th century an Indo-Trinidadian man seems to have married into a prominent family in Philadelphia’s Main Line. Today the descendants of this man still have a distinctive Indian name (with the transliteration tells which point to Trinidadian origins), though for all other purposes they’re Northeastern WASPs.

These are exceptional cases. The majority of American South Asians are Indian Americans of Hindu background with brown skin. Today. The intermarriage statistics for Indian Americans for the 2010 Census are not out yet. I would not be at all surprised if the ~45% ~25% outmarriage rate from 2000 was a short term peak, due to the relatively culturally isolated children of the immigrants of the late 1960s and 1970s reaching maturity in the 1990s. But whatever the exact figure, there is no doubt going to be a huge gap in outmarriage rates nonetheless between the immigrant Indian American community, which is still the majority in the USA, and those who were born or raised in the USA, who are a larger and larger minority.

This does not even touch upon the large number of children adopted from India and raised by Americans of all backgrounds. Or the hundreds of thousands of white Americans who have converted to Hinduism and identify as Hindus. The United States of America has a mythology of individuals recreating themselves anew. But another aspect of the story is that communities and identities are also refashioned anew.