Comedian Russell Peters was interviewed yesterday on The Current, a news show on 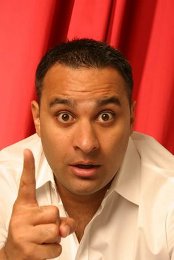 CBC Radio (the NPR of Canada) hosted by Anna Maria Tremonti. He had some interesting thoughts on freedom of speech in America — or the lack of it.

AMT: “So you’re living in the States now … Can you feel free to speak the same way you speak other places?”

RP: “No, in the States, you’ve really got to watch what you say. In Canada too, but not as much. But in the States, you really do. You’ve got to think about what you say before you say it. I don’t know where they get off saying that America has this freedom of speech thing. That’s the one freedom they don’t have … is freedom of speech. Nobody says what they want to say. And when people do, they get labeled as crazy or out of their mind or whatever or renegades … They don’t respect you if you actually say what’s on your mind.”

AMT: “So do you feel that way about Canada too, like do you see a difference in North America versus other parts of the world in terms of feeling free to say what you think?”

RP: “North America is very sheltered. This whole weird political correctness thing that they’ve started is the worst thing that’s ever been invented in my lifetime. It’s ruined everything. … I love talking to old people because they say exactly what they see. There’s nothing wrong or racist or undertoned about it. It is what it is. My dad used to call my black friends Negroes. He didn’t mean anything by it. He was old. He grew up at a time when black people were Negroes. ‘Who’s here, Dad?’ ‘Oh, one of your Negro friends is here.’ He wasn’t saying it for shock value, he wasn’t trying to be political incorrect, it was just what they saw. People get offended with what they see nowadays.”

AMT: “And do you find that that isn’t the case, say, in Europe or the Middle East …”

AMT: “Is that something you talk about on stage?”

(Listen to the entire interview here, along with some of his hilarious comedy bits.)

29 thoughts on “Russell Peters: One freedom Americans don’t have”