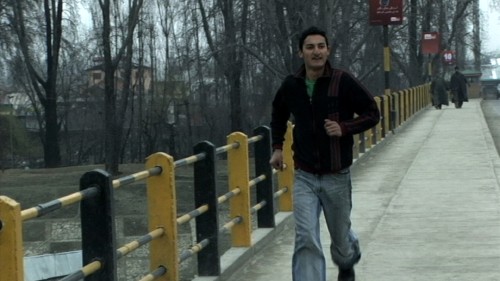 The film “Zero Bridge” is a film set in Kashmir and, therefore, the word “terrorist” is used in the film. But only once. This happens when a couple of young white men, tourists, lounging on a shikara on the Dal Lake have the following exchange with the film’s central character, Dilawar:

The youth Dilawar is in trouble in the troubled land. Which is not to say that he has been picked up from the street and tortured in a notorious prison, but simply that he isn’t on the straight and narrow. In fact, he is a pickpocket and, for a variety of reasons, you want him to get away with it. You also want him to learn to say hello to a woman, but I’ll come to that in a minute.

“Zero Bridge,” which had its theatrical premiere earlier this year at New York’s Film Forum, was written and directed by Tariq Tapa. Tapa is described in the press materials as “a US-born filmmaker of Kashmiri/Jewish-American descent.” (In response to an interviewer’s question about his bring Jewish as well as Muslim, Tapa replied: “Yeah. I used to like to tell the joke that when I go into a building, I don’t know whether to buy it or to blow it up.”)

Tapa’s father is Kashmiri and when Tapa was a child, he would visit Kashmir during the summers. In 2006, and then again in 2007, Tapa went back to Kashmir with a backpack full of equipment. The idea for “Zero Bridge” emerged after he had stayed in Srinagar for three months. While shooting the film, Tapa was his sole crew, shooting, directing, recording sound; his actors are all non-professionals, appearing in a film for the first time. Tapa has said that he was committed to showing ordinary daily life in Kashmir. A shoestring budget only partly explains these choices, and says quite a bit about Kashmir and its place in a war of representations.

Tariq Tapa is exasperated that Kashmir has served only as an exotic backdrop for Bollywood songs; he is also not too satisfied with the ways in which Western documentaries have equated Kashmir with terror. Not for him, then, the “blunt dialectics of tourism and terror.”

A direct result of this orientation is that we see a Srinagar we haven’t seen on the screen before. Instead of the landscape, the camera hovers in close-up near the faces of the actors; often, we see the dull, dimly-lit, stained interiors of rooms in which the characters work or wait. I read somewhere that the director would ask his colorist to drain the images of their rich colors. In a near-literal way, then, Tapa is interested in dirty realism.

His desire to not employ any actors from Delhi or Mumbai meant that for his central character he auditioned about 70 boys who had shown up in response to the posters he had put up on the walls of Srinagar. When I read this, I thought about Truffaut’s “400 Blows.” Truffaut had placed an ad in the papers and that is how he found the actor Jean-Pierre LÃ©aud; the boy had run away from boarding school to audition for the film. There is a great deal of freshness and charm in “400 Blows”; there is also a great deal of visual poetry in the way in which Truffaut’s camera looks at his beloved city. Even when portraying poverty, or cruelty, there is a sensitive attention to form and sensual detail. Such attention is missing in Tapa, and it’s possible he is simply not interested in a familiar form of aestheticism.

According to the press materials, when looking for his female lead, Tapa posted notices at several girls’ technical colleges but not at drama schools. There is a well thought-out but also rather severe, and in my judgment, limiting, logic of artistic creation at work here. Like the refusal to treat Kashmir as a location of exotic beauty, this determination to use actors who have no previous experience is a part of the same resolve to eschew–what exactly? ClichÃ©s? Yes, but Kashmir is the place where, as Tapa knows well, cinema-halls were gutted by militants or turned into garrisons by the security forces. There is no widespread culture of cinema in the valley. In the absence of any shared convention of movie-making as well as movie-watching, the actors often appear a little lost. Or maybe it isn’t the actors but only the viewer. The conventional viewer like me who doesn’t know if the character I saw stumble or hesitate on the screen was doing so because he faced a moral quandary or because he just didn’t know how to act in front of the camera.

The truth is that Tapa’s characters don’t always know how to act – they are trapped in their situation in life, and in Kashmir. They are played by people who are not trained as actors – they translate the lives of others with different degrees of ease or unease. There is a connection between those two things.

Let’s consider the scene where Dilawar makes a list of steps that are necessary in romance. Perhaps he should first say hello? He then writes down the second step: “So what’s after hello? Marry me?” He decides this is wrong. Another friend says he should say “hello” a thousand times–except, in a rush, he can just say “good evening” fifty times. While watching the sequence, I thought, “This is the independence that the Kashmiri want.” Which is not to say that the only demand the Kashmiris have from the world is the desire to be set free to love. Instead, it is to recognize that a character’s search for identity or for the right kind of knowledge can be seen also as the desire for a people to define their independence. I like this very much. All good works of art must ask this question: you want to breathe free, yes, but do you know how to kiss?