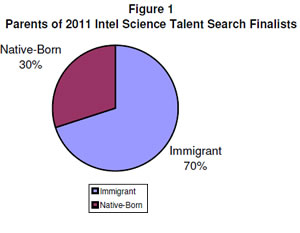 The study, conducted by the National Foundation for American Policy, found that 70 percent of the finalists in the 2011 Intel Science Talent Search competition — also known as the “Junior Nobel Prize” — were the children of immigrants even though only 12 percent of the U.S. population is foreign-born.

A think tank called the National Foundation for Economic Policy has released a report (PDF), The impact of the children of immigrants on scientific achievement in America. These aren’t just any “immigrants.” Ethnically 10 out of the 40 finalists are Indian American, and 16 are Chinese American, but perhaps more critically: “While former H-1B visa holders comprise less than 1 percent of the U.S. population, 60 percent of the finalists had parents who entered the U.S. on H-1B visas, which are generally the only practical way to hire skilled foreign nationals.”